Queensland rules out return to surplus in 2013 state budget

Queenslanders will each fork out an additional $181 as a result of the Newman Government’s second budget announcement yesterday, which is expected to earn the state an additional $1 billion in revenue over the next fiscal year. 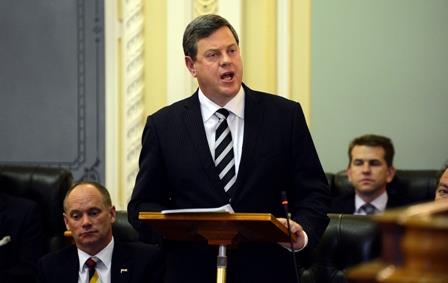 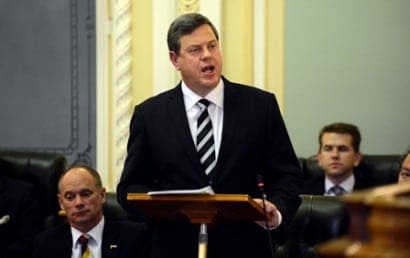 QUEENSLANDERS will each fork out an additional $181 as a result of the Newman Government’s second budget announcement yesterday, which is expected to earn the state an additional $1 billion in revenue over the next fiscal year.

The Queensland government has lost over $5.3 billion in revenue since the election of the Liberal-National Party last March under the leadership of former Brisbane Lord Mayor Campbell Newman. The devastating impact of ex-tropical cyclone Oswald in early 2013 and the additional costs of supporting the National Disability Insurance Scheme have resulted in Premier Newman being forced to delay a budget surplus until the 2014-15 financial year.

The budget, described by Treasurer Tim Nicholls as featuring “modest increases”, derives much of its additional revenue through an increase to the stamp duty on insurance premiums from seven per cent to nine per cent, which will come into effect on 1 August. This increase to stamp duty will not impact on government managed programs such as worker’s compensation or compulsory third party insurance on vehicles.

The Queensland government currently draws around 34.6% of its revenue through payroll tax, with the next most significant revenue stream being the 17.2% derived from transfer duties. The 2013-14 budget will see per capita state tax rise by around $200 to $2528, which Mr Nicholls asserts is still “competitive” when compared to the average per capita state tax of $3003 across the nation.

Despite Opposition claims that the Newman Government has relied on ‘razor gangs’ slashing public service positions in order to return the Queensland budget to a surplus, the 2013-14 budget does not show privatisation and outsourcing playing a major role in increasing state revenue. It provides funding for an additional 1200 public service positions across the state, in stark contrast to the significant cuts which took place during Mr Newman’s first year in power.

Mr Nicholls said that the government’s commitment to the production of liquefied natural gases would result in business investment falling, warning that the high revenue from the sector had almost come to an end. The mining industry has been considered the reason for Queensland’s strong economic growth, which remains higher than the national average of 2.75% despite falling by 0.5% over the last financial year.

Mr Nicholls said: “As the circumstances changed, we have been straight up and down with people and said ‘this is what the bureaucracy, this is what the experts are telling us will be the outcome’. We haven’t sought to pretend fruitlessly and mindlessly for a long time that we are going to achieve something when it becomes apparent that it is not going to be achievable.

“We’ve told them as revenue as fallen off, it will be falling off, we have told them as choices have to be made and we believe that we have made the right choices. We also, haven’t given up on the task of achieving that fiscal surplus in 14-15 but the numbers as they are presented to us today indicate that that won’t be achieved at this time, but we will continue to work very hard to see if we can to achieve that over the forward forecasts.”