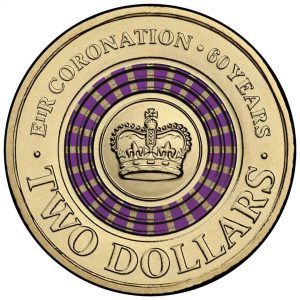 A NEW coin featuring royal purple stripes is being released by the Australian Mint to celebrate the Queen’s Diamond Jubilee the Governor-General announced on Friday.

Bernie Ripoll MP, Parliamentary Secretary to the Treasurer, said: “The 60th anniversary of the Coronation of Her Majesty Queen Elizabeth II is an important milestone that has only been achieved by one other monarch in history, and it is fitting that it has been chosen to be commemorated on Australia’s coloured circulating $2 coin.”

The special edition coin features St Edward’s Crown, which has been used to coronate British monarchs since the 17th Century, surrounded by three concentric purple rings.

“This coin is the Mint’s most innovative circulating release,” said Mr Ross MacDiarmid, CEO of the Royal Australian Mint.

The method used to apply the coloured purple and gold rings is a closely guarded secret.

The Australian Mint can produce up to 750 coins per minute with the help of ‘Titan’ the super strong minting robot.

The first commemorative $2 coin was released last year to mark Remembrance Day. Only half a million of the coloured poppy coins were issued.

Details on how overseas collectors may purchase an uncirculated Diamond Jubilee coin from the Australian Mint may be found here.