POSTCARDS FROM AUSTRALIA | This week in Haylee's adventures around Australia, driving from top to tail, she stops in at a little slice of paradise - Pebbly Beach, NSW.

by Haylee Slater
in News 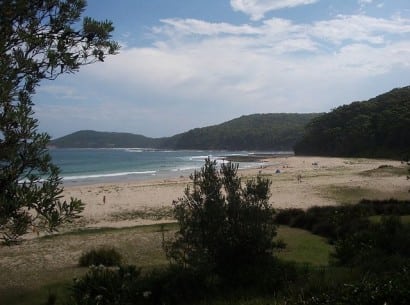 GREETINGS from the east coast of Australia! A land of shimmering ocean, sub-tropical rainforest and the smoothest roads I have ever driven on. The Pebbly Beach turn-off leaves the Princes Highway about 10 kilometres south of Termeil and takes you on a windy drive through the dense Murramarang National Park.

Pebbly Beach takes my breath away, and I am not alone. An English couple from Devon tell us they have been planning to come to Pebbly since they first arrived in Australia. They have made the journey from Melbourne just to spend the night here.

A grassy park meets the sand and visitors are happy to just lie around on their towels. We walk our deck chairs down to the waterline and get busy doing nothing. When we get too hot we refresh with a swim, then race back to our chairs to dry in the sun.

Hugging the shoreline is a deep trough, which makes the roaring tide appear deceptively tame. Typical of a lot of Australia’s beaches, it is easy to be swept up if you are not concentrating. While we choose to laze around, day-hikers make the seven-hour return hike up Durras Mountain. I envy their fitness levels but not the trek ahead of them. Others walk north along the coast to Snake Bay.

Seated on an old log is a typically Aussie man; Akubra hat, shorts. Surrounding him on the lawn are at least thirty kangaroos. The kangaroo population at Pebbly are quite happy to be patted and are happy to be photographed. Pebbly Beach is most commonly known as “Surfing Kangaroo Beach,” made famous after a kangaroo was snapped standing up to its chest in the water at low-tide.

When people imagine a perfect day in Australia, I’d like to think this is what they picture: a clear blue sky, the hot sun warming bare skin, no traffic or artificial noise. Peace. It is nice to know that at Pebbly Beach, it truly exists.