POSTCARDS FROM AUSTRALIA | 16,000kms into the trip we look down the barrel of another 11,000 of red dirt and blue highway home. We have fantasised about dumping the car on the spot and flying home. Still, we drive on.

by Haylee Slater
in News 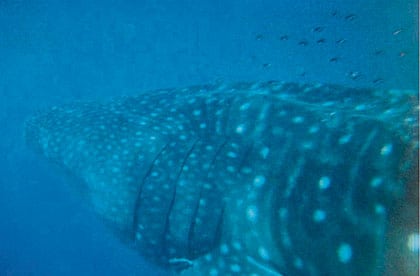 HEADING out of Port Hedland we begin to realise the enormity of the trip we have thus far endured. 16,000kms into the trip we look down the barrel of another 11,000 of red dirt and blue highway home. We have fantasised about dumping the car on the spot and flying home. Still, we drive on.

Exmouth is on the far western coast of Australia, famous for its diving with whale sharks on the Ningaloo Reef. We arrive in the dark and unsurprisingly nearly hit a stray animal on the highway. Surprisingly, the stray animal is a wild goat and we come across a few of them along the way.

It was a beautiful surprise to wake up by the sea. Moving into Western Australia from the Northern Territory we have crossing desert and rocky ranges for days. The weather has steadily grown cooler as we head south and the sky is a moody silver. The usually clear water is murky and rough. The King tides created by the Super Moon have brought waves that crash directly in on the foreshore. The surf sprays white water in a fine mist that settles over everything.

Situated at the tip of a peninsula, Exmouth is surrounded by rugged scrub and deep canyons. Braver campers disappear down gravel roads to hidden campsites deep in the bush. A veritable diamond in the rough, Exmouth is well worth the trek inland. Come for the quaint village, stay for the 50km of pristine sandy beaches.