As the debate over religious freedom heats up, the attorney-general has flagged that any proposed legislation would cover a situation like the Folau case. 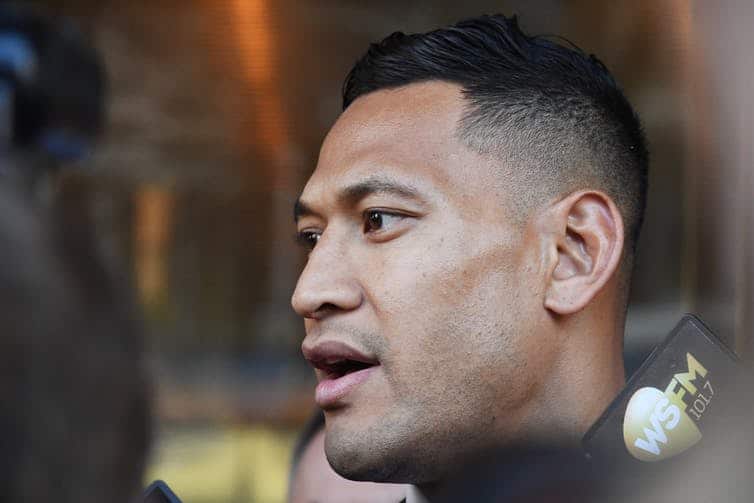 As the debate over the Morrison government’s plan to legislate against religious discrimination gathers heat, an Essential poll has found only 38% of Australians agree that stronger laws are needed to protect those who express their faith in public.

On the other hand, the poll found that 58% believed employers should not have the right to dictate what their employees say outside work.

When people were asked their opinion on various statements, 69% agreed with the statement, “it is only right that people consider how what they say can affect others.” A high proportion – 64% – agreed that “people should not be allowed to argue religious freedoms to abuse others.”

But 64% agreed that nowadays people were unlikely to say what they really think because they were afraid of how others would react.

Most respondents knew about the dispute between Rugby Australia and Israel Folau – who was sacked after a homophobic post based on the Bible – although people were divided over whether it was mainly about Folau’s right to express his religious views (43%) or about whether Rugby Australia should be able to dismiss an employee who was in breach of his contract (49%).

Two-thirds (68%) agreed that Folau chose to share his religious views on social media and should take responsibility for them. About half (51%) agreed he had used his public profile to attack a minority group in the community.

Nearly half (46%) thought Folau’s actions had damaged the Wallabies team and rugby in Australia, while just 34% believed he had the right to voice his religious views, regardless of the hurt it could cause others.

What various interest groups are saying

In an interview published by Guardian Australia, Attorney-General Christian Porter flagged that his proposed religious discrimination legislation would cover a situation like the Folau case.

Porter said the legislation would include a clause relating to indirect discrimination.

This would provide an overarching rule that places limitations on what an employer could do by way of general rules that affected all of their workforce, if those general rules, in an unfair and unreasonable way, had a negative – or what the legislation calls a disadvantaging – effect on a person of faith.

Prime Minister Scott Morrison has said he does not want the legislation to be divisive. But he is faced with a widening debate that will be difficult to manage.

Hard-line conservatives in the Liberal party want the government to go further than it is inclined. But the free-market Institute of Public Affairs is warning about unintended consequences of legislation. And advocacy groups for women and gays are agitated that the legislation – the origins of which was as a sop to the losing side in the same-sex marriage debate – could lead to new discrimination.

The women’s group Fair Agenda has joined with LGBTIQ advocacy organisation Equality Australia to ask the government to ensure people of faith, women and LGBTIQ people “are protected equally.”

The groups, who want a meeting with the government, warned on Tuesday that inappropriately drafted provisions could override existing legal protections for LGBTIQ people and women, and undermine employers’ ability to maintain safe and inclusive workplaces.

They are also concerned about

the impact of any unfettered free speech provisions that some religious lobby groups have been arguing for, which could override important reproductive health protections such as safe access zones that operate in many states.

John Roskam, executive director of the IPA, told Sky that while there were concerns over people of faith being driven from the public square, the government’s proposals, from the little known thus far, were counterproductive.

are best faced by community sanction, by debate, by discussion, by argument, not by creating more laws.

Roskam said there was also a risk of

This article is republished from The Conversation under a Creative Commons license. Read the original article from 9 July 2019.