The 14 September Australian federal election date is in doubt as Kevin Rudd puts together a new cabinet and reshapes Labor’s message. Mr Rudd was sworn in as prime minister by Governor-General Quentin Bryce in Canberra on Thursday morning. 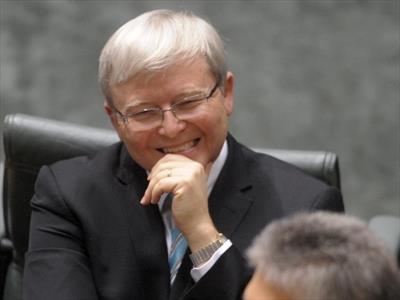 PRIME Minister Kevin Rudd has called for an end to negative politics and cast a doubt over the election date, as he began work on re-energising Labor and appointing a new cabinet.

Governor-General Quentin Bryce swore in Mr Rudd and his deputy Anthony Albanese and Treasurer Chris Bowen during a brief ceremony at Government House in Canberra on Thursday morning.

Mr Rudd went from the ceremony to Parliament House, where his commission was accepted without the federal opposition moving a motion of “no-confidence” in the minority government.

Coalition Leader Tony Abbott said he was not going to play “games” by moving against Mr Rudd’s government but urged the incoming leader to call an election as soon as possible.

Mr Rudd told parliament he would adopt the practice of previous PMs and not preset the date, despite his predecessor Julia Gillard setting a poll for 14 September.

In finalising the date, he will consider the Group of 20 industrialised leaders’ summit (5,6 September), the upcoming local government referendum and the Jewish Festival of Yom Kippur (14 September).

But there would not be a “huge variation” from 14 September.

Mr Rudd used his first speech to parliament since re-taking the Labor leadership, after losing it to Ms Gillard in June 2010, to acknowledge politics was “a very hard life indeed”.

“Let us try, just try, to be a little kinder and gentler with each other in the deliberations of this parliament,” he said.

Mr Rudd praised Ms Gillard for her achievements on workplace reform and schools funding and praised her as a “standard bearer for women” as the nation’s first female prime minister.

Mr Abbott said Mr Rudd had not explained why Ms Gillard was dumped and a third of the cabinet had resigned their posts.

“We believe in building the house up … it seems, regrettably, those opposite are keen on tearing the place down,” Mr Rudd told parliament.

He’s due to name a new cabinet on Friday, which will include Senator Penny Wong, science minister Don Farrell and defence minister Stephen Smith, who’s planning to retire from politics at the election.

One of the so-called “faceless men” behind the 2010 coup, Bill Shorten, revealed he had been thinking about switching support to Mr Rudd for weeks, although the final decision was “incredibly difficult”.

“But I also know the cause which I serve .. is more than just about individuals,” he added.

Mr Rudd will take advice on the issue from national security agencies in coming weeks.

The opposition called on Mr Rudd to scrap the 1 July rise in the fixed carbon price from $23/tonne to $24.15/tonne. While that won’t happen he could consider bringing forward the floating price emissions trading scheme to 2014 from 2015. – AAP