Prime Minister Kevin Rudd has promoted many of his key leadership backers with his new look frontbench. 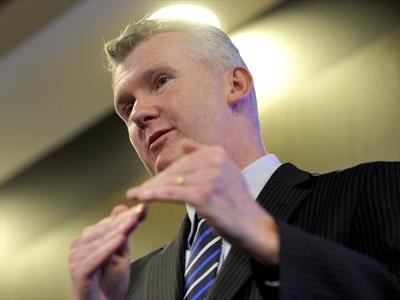 PRIME Minister Kevin Rudd has rewarded many of his key caucus supporters by promoting them to his new look frontbench.

Powerbroker Bill Shorten, who spectacularly switched his support to Mr Rudd moments before last week’s leadership ballot, is a big winner, taking on the education portfolio.

That makes him the chief salesman for Labor’s schools funding reforms.

Other key Rudd supporters Joel Fitzgibbon and Richard Marles have been promoted to cabinet.

Mr Fitzgibbon, one of Rudd’s key numbers men, was defence minister in Mr Rudd’s previous government but was demoted over a conflict of interest scandal. He now takes on the agriculture, fisheries and forestry portfolio.

Kim Carr, who was sacked from cabinet by former prime minister Julia Gillard, returns to cabinet as minister for innovation, industry and science.

That brings the total number of women in cabinet to six, alongside Penny Wong, Jenny Macklin and Tanya Plibersek, who all keep their Gillard government portfolios.

Another Rudd backer to get a promotion is Melissa Parke, who becomes Australia’s first minister for international development. Other Rudd supporters were given parliamentary secretary roles, including Ed Husic, Alan Griffin and Doug Cameron.

Mr Rudd says his new team’s top priority will be to keep the economy strong.

“That’s why I have assembled today a strong economic team, one with vastly more experience and vastly more competence than those we face opposite,” he told reporters as he made the announcement in Newcastle on Monday.

Gillard supporter Tony Burke will move from environment to the vexed immigration portfolio.

“It’s a tough challenge,” the prime minister said, adding that he was certain Mr Burke would bring the right balance of toughness and “heart”.

Brendan O’Connor moves from immigration to employment, skills and training.

Other ministers who have retained their Gillard government portfolios include Bob Carr in foreign affairs, Jason Clare in home affairs, Stephen Smith in defence and Mark Dreyfus as attorney-general.

But Mr Clare has been shifted from cabinet and back to the outer ministry.

Don Farrell will be the new sport minister, replacing Gillard backer Kate Lundy who remains in the ministry with the multicultural affairs portfolio.

But former Labor leader Simon Crean will not be serving on Mr Rudd’s team after announcing he his quitting politics at the next election.

Mr Rudd, Mr Albanese and Treasurer Chris Bowen have already been sworn in.

The rest of Mr Rudd’s new team will be sworn in at Government House 2pm AEST on Monday and will hold their first cabinet meeting two hours later. – AAP