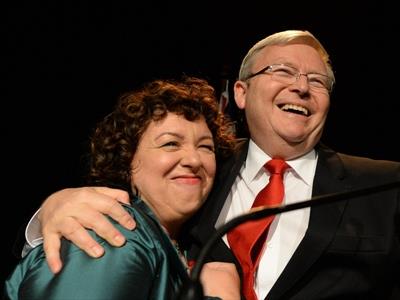 PRIME Minister Kevin Rudd has conceded defeat in the election, but says Labor had fought the good fight.

“Geez I thought we’d lost,” a smiling Mr Rudd told the cheering crowd at the Labor function at the Gabba in Brisbane.

In conceding defeat he congratulated Liberal leader Tony Abbott and wished him well.

“My fellow Australians, my fellow Queenslanders and fellow members of the great Australian Labor Party,” he said.

“Today we have fought the good fight as the great Australian Labor Party.

“Tonight is the time to unite as the great Australian nation, because whatever our politics may be, we are all first and foremost Australian.”

Mr Rudd said he had telephoned Mr Abbott a short time ago.

He also wished Mr Abbott, his wife Margie and entire family, all the best in the “high strain” lifestyle that accompanies the leader of the country.

Mr Rudd and wife Therese Rein looked forward to greeting Mr and Mrs Abbott at the Lodge next week, as the John Howard had welcomed him when Mr Rudd first became prime minister in 2007.

“I also wish his government well for the great and difficult challenges that now lie ahead for Australia,” Mr Rudd said.

He then directly addressed Labor supporters across the country and supporters in the room at the ALP function at the Gabba cricket ground started a loud “Kevin Kevin Kevin” chant.

“Gee, a couple more days and we might have got there,” he said in response.

Mr Rudd said he knew the hearts of Labor supporters were heavy and he took full responsibility for Labor’s loss.

Mr Rudd said despite the “prophets of doom”, Labor had remained a viable fighting force for the future and retained all its seats in Queensland and all cabinet ministers.

Mr Rudd said he was proud every Labor cabinet minister and most of the outer ministry had been returned at the poll.

He paid tribute to those MPs who had lost their seats, applauded their courage and commitment and praised the ALP “true believers” who had supported Labor’s campaign.

“For our party and our movement, we have known defeat before,” he said.

“But I say to you, throughout our 122-year history we have always risen from defeat to renew our party with fresh fervour and fresh ideas for the future and we will do it again.”

Harking back to the strength of World War Two Australian Labor prime minister Ben Chifley, Mr Rudd made a call for unity to members of the party.

“Ben Chifley’s light on the hill still burns bright across Australia,” he said to loud cheers and applause.

“It is a flame that cannot be extinguished and while there is still breath in Labor bodies, strength in Labor sinews, and hope in Labor hearts Ben Chifley’s light on the hill will continue forever.”

Mr Rudd thanked the “good burghers of Griffith” for backing him again, and paid tribute to his Liberal competitor Bill Glasson, who has conceded defeat.

“It would be un-prime ministerial of me to say Bill Glasson eat your heart out, so I won’t,” he said, to more cheers.

“It is a truly marvellous part of Australia and I thank them for again returning me as their local member.”

Mr Rudd launched into a long list of thank-yous, starting with his deputy Anthony Albanese.

“I thank you Albo for your courage, your loyalty, your remarkable humour and your determination always to fight, fight and fight,” he said.

Senate leader Penny Wong was acknowledged for her strength, commonsense and friendship while Mr Rudd’s frontbench were valued for their energy and fighting spirit.

He went on to thank “the army of true believers” – ministerial and AMPs staff, branch members, campaign volunteers and affiliated unions.

Confidant Bruce Hawker was also singled out for special appreciation.

Thanks was also given to Mr Rudd’s staff and the Labor hierarchy.

“And for putting up with me, I really do thank you for that.” – AAP