A plaque stolen from the Australian War Memorial at Hyde Park corner in London has been recovered by Metropolitan Police and will be restored in time for Remembrance Day on 11 November. 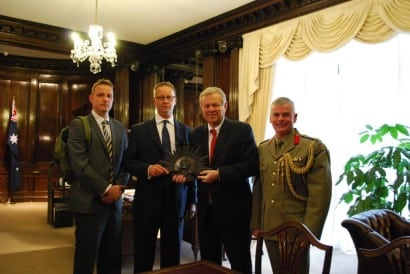 A PLAQUE stolen from the Australian War Memorial at Hyde Park corner in London has been recovered by Metropolitan Police and returned to the Australian High Commission.

The theft of the Rising Sun plaque occurred during the weekend of 18-19 May when the Australian War Memorial was vandalised. A number of bronze letters were also removed from the memorial.

The memorial, near the Wellington Arch, commemorates the sacrifice of those Australian men and women who lost their lives in service to their country during WWI and WW2.

It is an important gathering point for Australians living in the UK to pay tribute to the contributions of Australian soldiers. This year over 3000 expats came together for an Anzac Day dawn service held at the memorial.

It was initially feared lost following the vandalism, however has now been recovered by the Metropolitan Police as part of an ongoing investigation into another issue.

The plaque was returned to the Australian High Commission by two members of the Met Police, and received by the High Commissioner Mike Rann and Bill Sowry, the Head of Australian Defence Staff and Defence Adviser UK.

The Rising Sun plaque will be restored and the memorial repaired in time for Remembrance Day on 11 November 2013. This year marks the tenth anniversary of the memorial.