A Cobham Aviation plane has made an emergency landing at Perth Airport after flames were reportedly spotted coming from its engine. 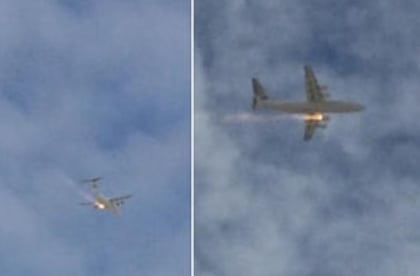 A plane has made an emergency landing at Perth Airport after a suspected engine fire erupted shortly after take-off.

Witnesses have reported seeing the flames coming from the right engine.

The Perth Airport website shows that a Cobham Aviation flight was scheduled to depart at 10.45am for Barrow Island.

Pictures have emerged on social media of a plane with an engine appearing to be on fire, but it has not been confirmed as the plane involved in the emergency.

The aircraft is currently being assessed at the airport.

A spokesman for the regional carrier said a statement would be issued later on Tuesday.

Cobham Aviation Services said the engine fire occurred soon after take-off and that the four-engine BAE 146 jet was bound for Barrow Island.

A spokesman said the pilot and crew safely returned the jet to Perth Airport at 10.53am (WST).

“The aircraft was climbing after take-off when the fire occurred in engine No.2, which is on the inner port side of the aircraft,” he said.

“When the fire was detected, the engine was shut down and the fire extinguished.

“There were no injuries among the 92 passengers or two pilots and three cabin crew.”

The incident is being investigated and regulatory authorities have been informed, the spokesman says. – AAP