Police have arrested the ringleader of an organised criminal syndicate that allegedly used backpackers to sell forged jewellery throughout Queensland. 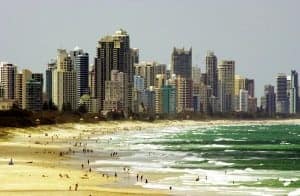 QUEENSLAND police have arrested a 29-year-old Gold Coast man believed to be at the centre of a criminal syndicate that used backpackers to peddle forged jewellery.

The alleged ringleader of the forgery ring was arrested on Saturday after police searched his Mermaid Waters apartment and discovered a cache of stolen passports, forged documents, jewellery and counterfeit money. The man was remanded in custody to face court later this week.

Police allege that the syndicate targeted Asian tourists and backpackers along the Queensland coast, drawing them into the forgery scheme through hostel noticeboards and community newspapers. The group’s ringleaders would then confiscate the traveller’s passport before engaging them to sell forged jewellery.

The 29-year-old man arrested over the weekend is understood to have a background in metallurgy and some experience in the precious metal industry. The forged jewellery was made using paints and powders to coat steel wire and other less expensive metals in fake gold that was then sold to traders over the internet.

Detective Superintendent Brian Hay of the Fraud and Cyber Crime Group said that the forgeries were of such good quality that they tested as authentic gold when basic testing was applied.

Det. Supt. Hay said: “I have no doubt that we have people in the precious metal industry … who have no idea that they have actually purchased fake gold. The coatings that were being used … tested as legitimate.”

Det. Supt. Hay said that the group also used stolen passports to open bank accounts in order to launder their illicit earnings. Reports suggest that members of the syndicate withdrew at least $30 000 from these bank accounts at ATMs throughout Queensland.

Det. Supt. Hay said: “Targeting backpackers and tourists is certainly a low act. It tarnishes our reputation and these people need to be stopped as soon as possible. Investigations are continuing and police would like to speak to other backpackers who may have fallen victim to the syndicate, as well as workers in the jewellery industry. Our message to anyone is to never hand over your passport or identifying details to anyone without doing very comprehensive checks yourself.”

The discovery of this criminal operation targeting backpackers comes two months after Gold Coast Mayor Tom Tate suggested that the city may require a marketing campaign to overcome its reputation as Australia’s “crime capital”. The city was given the moniker by the Queensland Police Union after a spike in violent incidents and bikie-related crime over the past several years.

Cr Tate said: “The spotlight is here and we don’t have any more crime than anywhere else in Australia. The statistics that have been given to me by the police prove that and the crime rate’s very low. But any incident that’s newsworthy, yes it will be highlighted, so what we’ve got to do is be proactive.”