Off the Gillard Titanic and into the Rudd lifeboat

OPINION | So Kevin07 has finally been resurrected as Kevin13. But will the 13-version turn Labor's luck around? And in the nick of time? 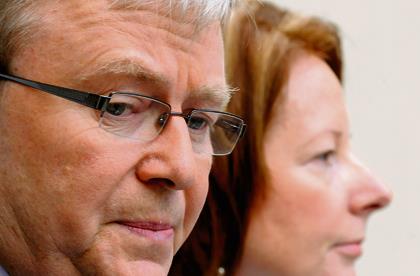 The egg timer has been turned on Australia’s election date, now ticking away like a time bomb, ready to change history in just over 70 days on 14 September.

Kevin the Sequel, his aides assure me, is a reformed man.  One who is back, but without a vengeance.  But now that the dust is settling over the political earthquake last week, can the election oil-tanker-juggernaught be turned around just in time?  Can ‘Rudd the Sequel’ put enough boots on the ground to canvass disillusioned voters to have that 2007 famous faith again?  Is there an Aussie version of ‘Yes We Can’?  And who is more unhappy and anxious about having Rudd back in Kirribilli House – Gillard or Abbott?

Yet it didn’t have to be this way.  Gillard’s supporters on the front bench shocked sister Labour movements around the world, from British Labour to the American Democrats by clinging onto Welsh-born Julia despite obvious signs that this political version of Titanic was going to have a catastrophic election ending.  It didn’t seem to matter to those dozen or so pro-Gillard Labor MPs who personally faced electoral annihilation with their local voters at the upcoming election because of their support.  They certainly didn’t quarrel with the leader, instead just quietly packing their bags and emptying their offices.  Detractors will insist that’s either spectacular loyalty to the point of electoral suicide, or the greatest lack of backbone in political history.

But there’s the positive side to emphasise. Gillard’s successes and positive legacy in Education policy and the Fair Work Act as Prime Minster were good healthy laws to ensure the famous Aussie ‘fair go’ will stand the country in good stead. But healthy laws alone don’t ensure success and re-election for a political leader.  Neither did Rudd’s apparent abrasiveness with colleagues which factored into his dislodging as leader.  Australia’s renewed Prime Minister now pleads for “a kinder, gentler” political debate, as he asks young voters to switch back on to politics so we can “cook with gas”.  Paying tribute to former enemies and rivals is part of Rudd’s own ‘kinder, gentler’ way.  It’s unlikely the Abbott and Costello Show will take heed and will now attack ferociously.

Australian Labor have had a frustrated line of leaders from Crean to Latham, and Beazley to now Gillard. Finally jumping from the Gillard Titanic to the Rudd lifeboat at the last minute has provided a dramatic scene for September, promising a clash of the Titans.  Who needs Neighbours and Home and Away when we have this drama to savour?  The campaign for Labor’s resurrection under Kevin13 must begin ‘yesterday’.  Whether history can repeat itself is another question.  But at least election day isn’t the day before – on Friday 13th.  Luck or not, see you at Australia House in the voting queue.  Now where’s those new campaign T-shirts? Oh, and don’t forget the lamington bakes to hand out!