Premier Mike Baird vowed to restore the community's trust in the NSW government after a shocking 48 hours of state politics. 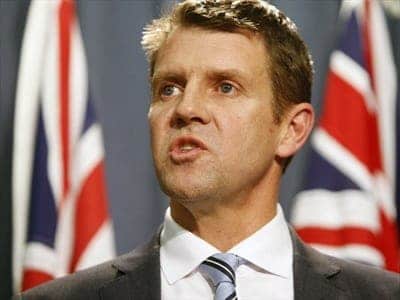 Mike Baird has vowed to restore trust in the government and transform NSW after his sudden rise to premier replacing Barry O’Farrell.

The former banker, who had served as treasurer in the O’Farrell government, was elected Liberal leader unopposed on Thursday.

The top job was vacated following Mr O’Farrell’s resignation for giving misleading evidence to the corruption watchdog about a $3000 bottle of wine.

In his first media conference as incoming premier, Mr Baird said the community was “incredibly disappointed and shocked” by the events over the past 48 hours.

The committed Christian said he would be announcing a set of integrity measures in the coming days and weeks to restore trust.

“What is absolutely challenging for any government is when you lose the trust of the community,” he told reporters, flanked by his wife and three children.

“My job, Gladys’s job, the government’s job, is to restore it,” Mr Baird said.

He paid tribute to Mr O’Farrell, saying he was a man of integrity.

“We have made a great foundation,” he said.

“But I don’t want to just stabilise NSW – I want to transform it.”

Mr Baird, who is a surf buddy with Prime Minister Tony Abbott on Sydney’s northern beaches, said he looked forward to working with the federal leader.

“I have to say it’s a pleasure to work alongside a prime minister such as Tony Abbott,” Mr Baird said.

“I have known Mike for many years and I know he will discharge his responsibilities with integrity and honour,” the PM said.

“We were all apprehensive about what it would mean and that it would be a tough few years ahead but we still said he should do it because we thought he would do a great job,” Bruce Baird told Sky News.

He said he must answer questions about the appointment of Nick Di Girolamo, who is at the centre of a corruption inquiry, to the board of State Water Corporation in mid-2012.