One man has died and hundreds of homes have been feared lost as firefighters labour to control some of the worst blazes NSW has ever seen. 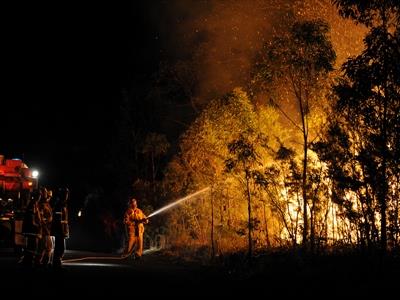 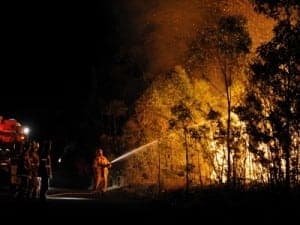 ONE man has died and authorities fear more fatalities will be discovered in the hundreds of homes destroyed by some of the most destructive bushfires NSW has seen.

NSW Rural Fire Service Commissioner Shane Fitzsimmons says the fight to get the blazes under control on Friday is far from over, with 94 fires burning across the state – 27 of which are uncontained.

A 63-year-old man died defending his house at Lake Munmorah on the NSW central coast, while the Blue Mountains, Lithgow and the Southern Highlands are also under attack from blazes which have torn though around 91,000 hectares throughout the state.

As residents and emergency services begin to return to affected areas, Mr Fitzsimmons said more casualties may be discovered.

“There is a possibility that we might find people who haven’t been able to get out of harm’s way,” he told reporters.

Crews were working on Friday afternoon to take advantage of the milder weather, before conditions are set to deteriorate on Sunday.

The fires were “some of the most damaging (and) destructive … in the history of NSW,” Mr Fitzsimmons said.

After losing possibly hundreds of homes on Thursday, the community of Springwood in the Blue Mountains was again on high alert when the blaze sparked up on Friday, forcing the evacuation of Springwood High School and the historic Norman Lindsay Gallery which houses many rare and significant artworks.

In the Southern Highlands, west of Wollongong, Mr Fitzsimmons said a blaze in Balmoral, which had burnt through 8000 hectares was “spreading rapidly” and increasing in strength.

An emergency warning is in place at Leppington, in Sydney’s southwest where there are fears homes may come under threat.

Meanwhile, further north in Wyong, where an emergency warning remains in place, properties are being threatened and an historic building has been destroyed, with multiple spot fires burning in the area.

A bushfire ripped through the quaint village near Lake Macquarie on Thursday, burning five historic buildings.

The 63-year-old man at nearby Lake Munmorah suffered a heart attack while he was fighting a fire at his home on Thursday afternoon.

Attempts were made to resuscitate him at the scene but he died at Wyong hospital.

“That’s the worst that anyone wants to happen and we send our sympathy to his family,” Mr O’Farrell said at RFS headquarters in Sydney.

But he said it was important to remember the good job firefighters had done.

“During crises like this we understandably tend to focus on what’s been lost,” he said.

“I think we should pause and think about what’s been saved, what’s been protected because of the extraordinary work of firefighters over the last 24-48 hours.”

Mr Fitzsimmons became visibly emotional as he addressed the media, and had to pause to compose himself as he praised the work of firefighters.

“We have the best firefighters in the world,” he said.

Two fire fighters are in hospital with burns and a man from Winmalee in the Blue Mountains is being treated for smoke inhalation.

Almost 200 interstate firefighters have been brought in to help the more than 1400 already on the ground.

Prime Minister Tony Abbott, an RFS volunteer himself, thanked those working on the NSW emergency.

“I just want to say how sorry we are on behalf of the people and the parliament of Australia for the heartache which so many hundreds of people in NSW are currently dealing with, but how proud we are of the thousands of volunteers and full-time professionals (fire fighters),” he said at Winmalee fire station.

The losses were calculated by a multi-agency team that was assessing buildings around Springwood and Winmalee on Friday, The Rural Fire Service (RFS) spokesman said.

But with only 30 per cent of the area so far being inspected, the RFS expects the numbers to rise.

Following a ferocious fire on Thursday, the community of Springwood was again placed on emergency alert on Friday when the blaze sparked and forced the evacuation of Springwood High School.

The evacuation meant school was basically out in the region, with an additional seven schools in the Blue Mountains and one in Lithgow remaining closed throughout the day.

Meanwhile fire crews were stationed around the historic Norman Lindsay Gallery in the afternoon, ready to protect the precious National Trust building if necessary.

One local, Helen Walton, who has lived through three major bushfires since moving to the mountains said the fire – which scorched almost 2000 hectares – was by far the worst she had seen.

Her house remains standing but her prize backyard has been reduced to ashes.

But she wasn’t letting the blaze scare her off.

“We’ll stay. Of course we’ll stay. We might have to re-landscape, though,” she told AAP.

The mayor of the Blue Mountains praised the resilience of residents who lost their homes in Thursday’s bushfires.

“The Blue Mountains has experienced bushfire before, but nothing like this,” Cr Greenhill told the Seven Network.

“We spent the evening … comforting residents who had lost everything. This has been a very tough 24 hours for the community of the Blue Mountains.”

By Friday afternoon, an emergency warning which was in place for a fire at Springwood was downgraded to watch and act.

Firefighters are continuing to patrol and monitor the fire, which has affected areas around Winmalee, Warrimoo and Yellow Rock.