Please fold your lap trays, and continue using your electronic devices, as we prepare to land. Qantas and Virgin Australia allow passengers to keep their devices switched on from 'gate to gate'. 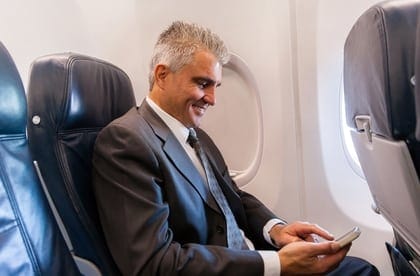 Turning your technology off while on a flight is a thing of the past for passengers on Australian airlines.

Both Qantas and Virgin Australia have discarded the red light in the bulk head warning you not to use any electronic devices. In fact they are saying you can continue to use your mobile smartphone, e-reader and PSP type gaming device throughout the journey.

Passengers were previously asked to switch off these types of devices during flights for safety reasons but Australia’s Civil Aviation Safety Authority (CASA) said it approved applications from both Australian airlines which will allow their passengers to use electronics while in transit.

The application by the two airlines was made in keeping up with the growing number of airlines in the United States, Europe and New Zealand already allowing passengers to keep their phones on during flights.

“At some point stewards will ask passengers to put their electronic devices on flight mode, probably before the safety briefing is given,” said CASA spokesperson, Peter Gibson.

Aircraft are now designed and manufactured so that smartphones and other electronic devices do not interfere with flights, added Gibson

In effect, the new rule would mean that passengers can continue to play games or draft emails on their phones during take-off and landing.

“Larger devices such as laptops, however, will still need to be stowed away during take-off and landing due to risks of turbulence.

“The change does mean that passengers will be allowed to speak on their phones from gate to gate though,” Gibson said.

Once a smartphone is in its so-called flight mode, it means passengers can no-longer send text messages or make calls.

Mr Gibson said the next step for the two Australian airlines would be the introduction of technology that would allow internet and voice call connections in-flight.

While neither Virgin Australia or Qantas have made an investment in such technology, Gibson says, “Trials have taken place with that technology with Qantas between Sydney and Melbourne.

“But there are a lot of costs involved and it will be a commercial decision for the airlines as to whether they can recover those costs.”