Newman should pay up or shut up: Palmer

Federal MP Clive Palmer says it's not right that Queensland state funds will be used by premier Campbell Newman to defend him against defamation claims. 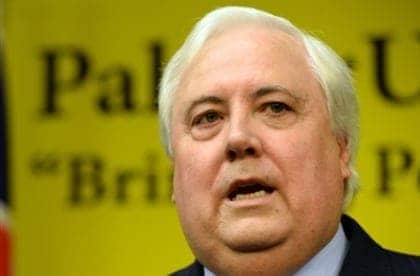 If Mr Palmer was successful he said he’d donate the damages awarded to him to public servants made redundant by Mr Newman’s government.

He said it doesn’t seem right for the state to have to foot the premier’s legal bill.

“Where it’s a wholly personal affair, he’ll rely, siphon off, taxpayer funds without going to his pocket to defend himself in court,” Mr Palmer told reporters.

Labelling Mr Newman a liar, Mr Palmer said the premier’s claims on Sunday were nothing more than the angry rants of a man trying to cling to power.

“The premier’s got his own problems,” he said.

“I would recommend he seeks medical treatment.”

He also denied claims there had been any inducements used to get three Northern Territory MPs to join his political party over the weekend.

Alison Anderson, Larisa Lee and Francis Xavier Kurrupuwuy flew to meet with Mr Palmer at his Coolum resort on Saturday before confirming they would join the Palmer United Party.

The three indigenous MPs quit the NT’s ruling Country Liberal Party early in April as a result of a rift between Ms Anderson and Chief Minister Adam Giles, with Mr Palmer claiming they had been racially vilified by some in the party.

“It’s very disappointing that you find people not giving people credit for their own independent judgment,” Mr Palmer said.

“The Liberal Country Party in the Northern Territory, it seems, has torn itself apart by not providing good government to that state.”

Saying he anticipated his party being an “active” player in next year’s Queensland state election, Mr Palmer added his party had been approached by “many” members of the Queensland government backbench, disillusioned with Mr Newman’s leadership.