Defence has launched a massive investigation into more than 100 army and other personnel over the distribution of offensive images of women. 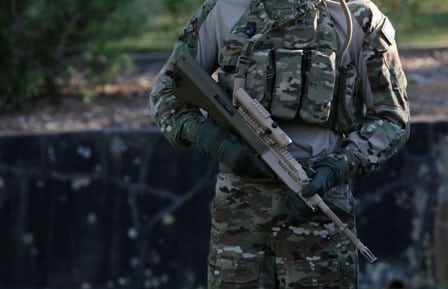 AUSTRALIA’S defence boss admits there are “systemic problems with culture inside the army” as another sex scandal engulfs the military.

Three officers have been suspended and more than 100 others are being investigated over the creation and distribution of explicit and “profane” material featuring several women on defence computers and the internet.

Another 14 army officers and non-commissioned officers also face suspension, while a further 90 mainly army personnel have been implicated in the exchanges.

The highest ranked was lieutenant colonel.

As the complex internal investigation begins, Army chief Lieutenant-General David Morrison declared it was worse than the 2011 “Skype scandal” in which a cadet secretly streamed footage of him having sex with a female colleague to his mates.

“These are actions by men who have been in the Defence Force for in excess of 10 years,” the general told reporters on Thursday.

“This goes to the heart of … systemic problems with culture inside the army.”

It’s understood the material, which was uncovered on April 10, includes images of defence women in sporting attire accompanied by offensive commentary.

Other imagery was digitally altered to be offensive.

Images of naked women and videos of sex acts were also discovered, although it’s yet to be verified if they feature defence personnel.

General Morrison said more than five women so far identified were members of the defence force, public servants and civilians.

The scandal emerged despite two years of concerted efforts by defence to reform its traditionally male-oriented culture.

It had seemed to be working, with female recruitment up across all three services.

However, General Morrison acknowledged there was a long way to go.

She said some quarters of the Australian Defence Force (ADF) still believed it was no place for women.

“There is a lot of activity within the ADF … but this is definitely a huge setback, let’s make no mistake,” she told Sky News.

“In the end they do reputational damage to their mates, to the army, to the defence force and indeed to the nation,” he told reporters in Perth.

“I am sure that today there will be thousands of men and women in the Australian army and ADF who will be shocked and horrified.”

While Prime Minister Julia Gillard acknowledged a lot of work had gone into changing army culture to make it more female inclusive, she condemned the behaviour.

Australia Defence Association executive director Neil James said serving and former defence personnel were incredulous and shocked at the rank of those involved.

“The extent of the incredulity, in my opinion, shows that the cultural change is working quite well,” he said.

Opposition defence spokesman David Johnston will seek an urgent briefing with the Chief of Army on the progress of the investigations.

“Lieutenant General Morrison is entirely correct when he says that he wants the mums and dads of Australia to be comfortable with their daughters joining the organisation,” he said in a statement. – AAP