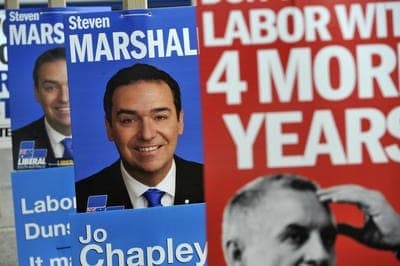 The horse trading has started in South Australia in the wake of an election that remains too close to call, with the two independent MPs that appear certain to hold the balance of power in no rush to decide who they will support.

Prime Minister Tony Abbott also weighed in on Sunday, delivering a blunt message to the two potential kingmakers – Bob Such and Geoff Brock – that South Australian voters would feel cheated if Labor was returned to power despite the Liberals getting a majority of the vote.

With more than 68 per cent of the vote counted, Labor was on course to win 23 seats in the 47-seat lower house, the Liberals 21, with the independents to hold two. The electorate of Mitchell is still too close to call.

But the failure of the Liberals to gain the 24 seats needed to govern in their own right comes despite the party winning more than 52 per cent of the two-party preferred vote.

Mr Abbott, who missed out in negotiations to form a minority government after the 2010 federal election, said the independents should take heed of the Liberals’ two-party vote.

“I suspect that the people of South Australia will feel cheated if having voted quite substantially for a change of government, that’s not what they get,” he said.

However, Dr Such and Mr Brock said that would not weigh heavily on their minds.

“He (Mr Abbott) should have been mindful about destroying the automotive industry here,” Dr Such said.

“He wasn’t very mindful about that.”

Premier Jay Weatherill, who met with the independents on Sunday, conceded it may take until the end of the week before the outcome of the election is known.

The result will hinge on a record 170,000 pre-poll and postal ballots, which could swing the outcome in several seats when counting begins on Monday.

Mr Weatherill said it was “more likely than not” that Labor would retain 23 seats, leaving the party one short of governing in its own right, and needing to convince at least one of the independents to back a Labor government.

“Ultimately it’s their decision but we’ve opened up those discussions,” he said.

They haven’t resolved whether to make a joint decision or independent decisions.

“What we want is a stable government going forward and we think that if there is a minority government we can work that out,” Mr Brock said.

“We are here to make certain we have good financial management and good stable government for the benefit of all South Australians.”

Liberal leader Steven Marshall, who will meet with the independents on Monday morning, said he expected pre-polling to favour his party, and on Sunday delivered an early pitch to win the pair’s support.

“I think the overwhelming feeling in South Australia is a mood for change and I’ll be presenting that to both Bob Such and Geoff Brock tomorrow,” Mr Marshall said.