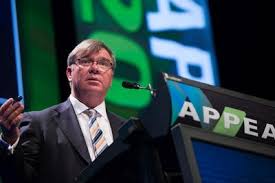 Mr Gray made the remarks at the annual Minerals Council of Australia dinner at Parliament House on Wednesday night, where he was speaking in place of former Prime Minister Julia Gillard.

Relying on incorrect advice, Mr Gray told the attendees at the dinner that Nelson Mandela had died. Mr Mandela is critically ill in a Pretoria hospital where he is being treated for a lung infection.

“I apologise unreservedly and am deeply sorry to have relayed what I thought was reliable advice,” he said on Thursday.

Mr Gray, Minister for Resources and Energy, has agreed to stay on in cabinet, despite backing Julia Gillard in Wednesday’s Labor leadership ballot.

He has previously criticised Mr Rudd leadership abilities, saying he did not have the “courage and strength” required to be Labor leader.

However, he told ABC radio on Thursday Mr Rudd had asked him to stay on, and he made a “practical and pragmatic” decision to do so.

“There is a new Labor leader and we have to get on with job of a government that is working in the interest of all Australians as soon as possible,” Mr Gray said.