A british immigration judge says boat race protester Trenton Oldfield has made an "enduring positive contribution to society" in the UK. 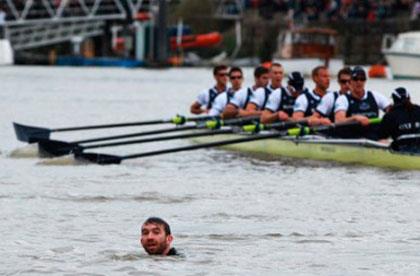 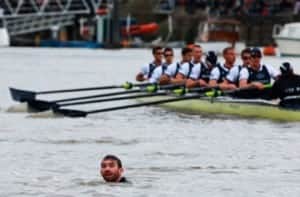 AN immigration judge who ruled rowing protester Trenton Oldfield could stay in the United Kingdom has made it clear the activist’s suggestion Australia was a racist country played no part in his decision.

Mr Oldfield appealed against the British government’s decision to refuse him a spousal visa which it did on the grounds the Australian’s presence wasn’t conducive to the public good.

When making his decision Judge Kevin Moore had said: “There is no doubt in my view to your character and commitment and the value you are to UK society generally.”

Now, in his full written reasoning, Mr Moore has criticised the Home Office for not properly considering how deportation would impact on Mr Oldfield’s family, the Guardian newspaper reports.

The 37-year-old, originally from Sydney, has a British wife, Deepa Naik, 36, and a five-month-old baby daughter. He’s lived in the UK for almost 12 years.

“I am not satisfied there is a public interest or that it is conducive to the public good in refusing [Mr Oldfield’s] appeal and in removing him from the UK,” Mr Moore writes.

“However, even if I was so satisfied, on the evidence before me such a public interest is outweighed by the appellant’s commitment and enduring positive contribution to society.”

Mr Oldfield swam into the path of the Oxford and Cambridge rowing crews as they raced down the Thames in April 2012 to protest over elitism. He was subsequently jailed for seven weeks.

Mr Moore states the protest was misguided but not violent.

“(The government) should have made a fair, proportionate and balanced decision” rather than focusing on one much-publicised incident, the Guardian reports.

Mr Oldfield had insisted if deported he’d be separated from his family.

He said his wife, who is of Indian descent, couldn’t live in Australia because some Indians in the community had suffered violent attacks.

But the judge determined it would be wholly unreasonable to expect Ms Naik to move Down Under because she’d never been there.

He stressed potential racism played no part in his decision.

“Such assertions were not supported by relevant and reliable background material.” -AAP