A desperate Canberra resident has launched an online campaign to help find his 1.8 metre-long missing python. 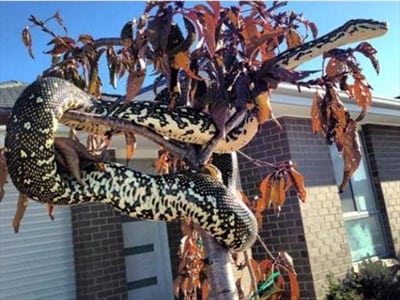 If you find him, don’t be afraid, owner Jay Rawlings says.

Diamond pythons are not venomous.

“He may be looking for somewhere warm and/or dark, do not be frightened if you see him,” Mr Rawlings wrote on the Canberra Lost Pet Database page on Facebook.

After returning from holidays, Mr Rawlings put Malcolm in his favourite front-yard tree at their Bonner residence on Tuesday for some long-overdue sunshine.

But after slipping inside to put on some washing, Mr Rawlings discovered that his beloved reptile had taken the belly express to freedom.

“Normally he’ll stay up there for a few hours,” he told AAP.

“They’re normally a tropical or coastline snake,” he said.

Despite Malcolm being worth between $200 and $1000, Mr Rawlings is confident the snake was not stolen.

Malcolm is black with bright yellow spots and probably won’t try to get away if approached – “unlike a red-bellied black”, Mr Rawlings says. – AAP