The Liberal candidate dubbed the “Where’s Wally” of the 2013 Australian election, Jaymes Diaz, has made a surprise appearance on the ABC’s comedy sketch program The Hamster Decides. 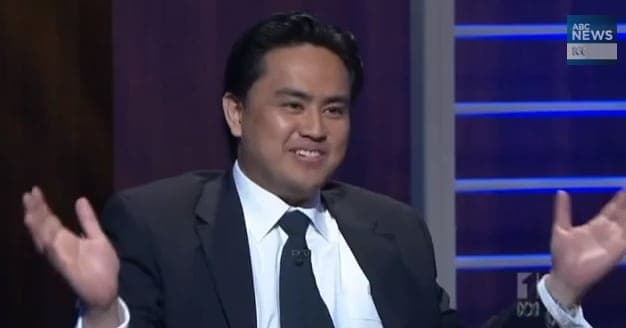 THE Liberal candidate dubbed the “Where’s Wally” of the 2013 Australian election has made a surprise appearance on the ABC’s comedy sketch program The Hamster Decides.

Jaymes Diaz made international headlines during his campaign for the seat of Greenway when he was unable to answer questions on the coalition’s six-point plan to “stop the boats”.

Mr Diaz avoided the spotlight for the remainder of the campaign, even turning up late at his own election party after news reporters spent the evening trying to track him down.

The interview has been partially blamed for Diaz losing a seat previously deemed unloseable, with Greenway bucking the national trend by recording a 3% swing to Labor.

The final episode of ABC’s The Hamster Decides on Wednesday night was the first on-air appearance of the law graduate since the infamous ‘six-point plan’ interview.

He is introduced by Chaser comedian Julian Morrow sitting opposite a cardboard cut-out of the unsuccessful candidate, and Morrow saying “Who would have thought, Jaymes Diaz not showing up to an election event — that’s bizarre” before appearing from backstage.

Diaz appears happy to return to the spotlight, telling Morrow he is always happy to answer questions.

“Is the best way to describe your campaign: a) successful or b) room for improvement?” Morrow asks.

After a pause, Mr Diaz says “I’m happy you asked that question” before being whipped away by a ‘Liberal Party HQ minder’ while he shouts “Wait, I know my six-point plan”.

The skit earned kudos for the gaffe-prone candidate on Twitter, with users praising his ability to laugh at himself.

Journalist Greg Jericho tweeted: “Credit to Jaymes Diaz there (Libs probably should have let him do that during the campaign).”

“Well that’s what Aussies are meant to do. Have the ability to take the piss out of themselves, good work Jaymes Diaz,” said @Yes_IamSancho