Hundreds of properties are feared lost in bushfires around NSW, and it will be a miracle if no lives are lost says Premier. 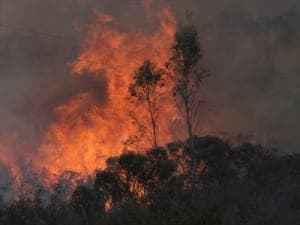 IT will be miraculous if no lives are lost to bushfires on a difficult and dangerous night ahead in NSW, Premier Barry O’Farrell says.

Hundreds of properties are feared destroyed in bushfires around the state, with up to 30 known to be lost at Springwood, in the Blue Mountains.

Mr O’Farrell said that despite a change cooling the weather where fires were burning, the danger was not over.

“It has been a difficult, damaging and dangerous day and these conditions are not going to be over quickly,” he told reporters at Rural Fire Service headquarters in Sydney on Thursday.

“Weather conditions are changing, it will take some days until we see the end of these fires.

“And I suspect that if we get through that without the loss of life we should thank God for miracles.”

“We have many hours yet still to run,” he said.

“It is going to be a long, difficult and dangerous evening ahead for firefighters and obviously the communities in the path of these fires.”

There are also unconfirmed reports of properties being lost at North Doyalson, on the Central Coast; at Lithgow; at Yanderra and Balmoral, in the Southern Highlands; and in Port Stephens, where a fire is burning near Newcastle Airport which has been closed.

Elsewhere in NSW, fires of grave concern to authorities are burning at Leppington, near Camden, west of Sydney, at South Nowra, on the south coast, and at Muswellbrook, in the Hunter Valley.

“If we get through today losing less than 100 homes, we’ll have been very lucky,” Rural Fire Service spokesman Anthony Clark said.

Firefighters are expecting a reprieve in the weather on Friday, but warn the hot dry conditions are due back by the end of the weekend.

Mr Fitzsimmons said it was too soon to estimate how many properties had been lost, adding “we’ll be counting properties in the dozens, if not the hundreds.”

“We are talking about destructive fire grounds and some pretty extraordinary fire behaviour,” he said.

And with the wind change altering the fire front, Mr Fitzsimmons expected communities on all sides of fires to be in danger.

Infrastructure and roads have been damaged, and no one has yet had the chance to assess the damage caused to utilities like water treatment centres.

Mr O’Farrell said it was “far too early” to estimate the cost of repairing damage caused by the fire.

Firefighting aircraft were used earlier in the day, but were grounded in the afternoon due to volatile, strong winds gusting at up to 110km/h Mr Fitzsimmons said.

RFS Deputy Commissioner Rob Rogers said it was probably the most serious fire risk NSW had faced since the early 2000s.

Some firefighters have suffered injuries, including one who’s been taken to hospital with burns.

In the Southern Highlands, communities around Bargo were warned to expect large fires, ember attacks and smoke from about 5pm as the change moved through.

Residents advised to evacuate to Bargo earlier in the day were being told to avoid the area. – AAP