A Singapore-based mining company will be forced to pay $150,000 after being convicted of the damage and desecration of an Aboriginal sacred site. It is the first such conviction in Australian history. 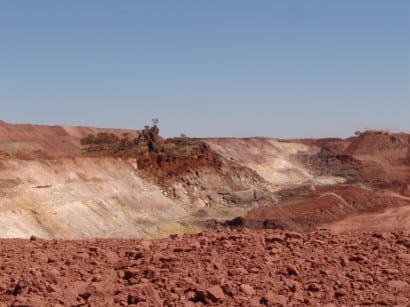 A supplied photo taken on Aug. 30, 2011 of the collapsed bull nose of a manganese ore mine at Bootu Creek, Northern Territory. The mine caused the collapse of an Aboriginal sacred site. (AAP Image/Gareth Lewis)

A MINING company has been slapped with a $150,000 fine for desecrating a sacred Aboriginal site in the Northern Territory.

The historic prosecution has prompted the Aboriginal Areas Protection Authority (AAPA) to urge miners to respect the law and honour their agreements during the mining boom.

Singapore based miner OM Manganese Ltd was handed the fine in the Darwin Magistrates’ Court for desecrating and damaging the ‘Two Women Sitting Down’ sacred site at their Bootu Creek manganese mine on Banka Banka station, 170km north of Tennant Creek.

Magistrate Sue Oliver said that the company had chosen profit before protection at its mine and had contravened the NT Sacred Sites Act 1989.

“What has been there for many thousands of years has been lost forever,” Ms Oliver said.

“It’s not just a loss for traditional owners, it’s a genuine loss of heritage for the country.”

It is the first case of a desecration to be successfully prosecuted under Australian law.

CEO of AAPA, Dr Ben Scambary, said it was a reminder that poor management and the disregard for important Aboriginal sacred sites would not be tolerated.

“When a sacred site is desecrated or damaged it tears the social fabric of the affected community as the harmony of those people is inherently linked to that sacred site,” he said.

Aboriginal custodians who were greatly distressed by the site damage had repeatedly travelled 1000km by road from Tennant Creek to attend the many hearings of the trial.

“This site has great significance to the custodians and relates to a dreaming story about a marsupial rat and a bandicoot who had a fight over bush tucker.  As the creation ancestors fought, their blood spilled out, turning the rock a dark-red colour that is now associated with manganese,” said Dr Scambary.

Little could be done to rehabilitate the sacred site which collapsed after OM Manganese continued blasting and excavating ore next to it, despite the appearance of cracks in the rock.

The company had pleaded guilty to causing damage at the site but not guilty to desecration.

“We never had any intention to cause damage or disrespect or hurt throughout the mining process,” said Mr Toth.

“We genuinely believed at the time that our mining methods and the pit design was sufficient to technically achieve our objectives in terms of developing the pit while protecting and preserving the site.

“I would like to personally, unreservedly and sincerely apologise to the traditional owners for the hurt that we’ve caused throughout this incident.”

Dr Scambary said that most miners in the NT were operating in a responsible manner.

He also stressed that most Aboriginal people were not ‘anti-mining’ but they did insist that their sacred sites be protected.

Under the NT Sacred Sites Act 1989 the site’s custodians were ineligible for any compensation and fines would go directly to the Northern Territory Government.