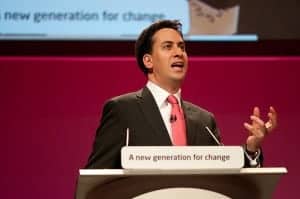 It was revealed earlier this month that Prime Minister David Cameron’s Conservative Party is paying Mr Crosby £481,000 ($853,000 AUD) to work full time on its campaign ahead of the 2015 election.

Mr Miliband on Sunday was scathing of the Australian after the conservatives last week attempted to link Labour with former Co-op Bank chairman Paul Flowers, who faces allegations of illegal drug use, sex with rent boys, drink-driving and the misuse of expense claims while working for a charity.

The opposition leader said Mr Cameron had previously claimed he wanted to end the worst adversarial aspects of Britain’s Punch and Judy politics.

“That project has now entirely disappeared and has been replaced by another – to build the Conservative Party of Lynton Crosby, a man whose mission the prime minister describes as being ‘to destroy the Labour Party’,” Mr Miliband wrote in The Independent on Sunday.

“This is a Conservative Party preparing to fight the dirtiest general election campaign that we have seen in this country for over 20 years.

“And the Crosbyisation of the Conservative Party has reached a new intensity as their leadership becomes increasingly desperate.”

The Labour leader said the Tories had decided to focus on mud slinging, division, smear and character assassination.

“These tactics have been tried before,” he wrote in the left-leaning newspaper.

“David Cameron has said he wants to ‘dust down’ the playbook for the general election of 1992 and doubtless that is why he has employed Lynton Crosby who has run elections of this sort in Australia.”

But, Mr Miliband said, Britain had the chance to say “not here and not this time”.

Mr Crosby is referred to as the Wizard of Oz in the UK press after he helped former Australian prime minister John Howard win four consecutive terms.

“If you are the alternative prime minister of a country, and you are using a platform to attack the activities of a political adviser and campaign director in another country, you display an odd sense of insecurity,” Mr Howard said during a visit to London.

The Conservative Party has increasingly appealed to voters’ perceived prejudices on immigration since Mr Crosby was put in charge of the Tory election campaign 12 months ago.

It’s also turned away from so-called non-core issues such as gay marriage and environmental policies.

Mr Hawker, who advised former prime minister Kevin Rudd on his doomed 2013 campaign, is due to speak to the British opposition this week.