Search co-ordinators say they have discounted an area of the Indian Ocean, where acoustic "pings" were detected, as being MH370's final resting place. 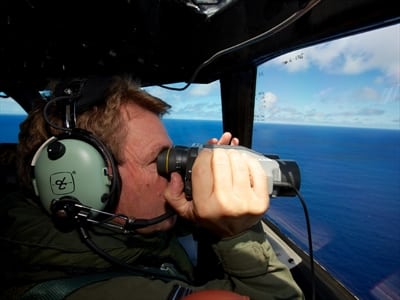 The missing Malaysia Airlines plane is not in the Indian Ocean search zone where acoustic “pings” were detected, search co-ordinators have confirmed.

“The Australian Transport Safety Bureau (ATSB) has advised that the search in the vicinity of the acoustic detections can now be considered complete and in its professional judgment, the area can now be discounted as the final resting place of MH370,” the Joint Agency Co-ordination Centre said on Thursday.

JACC announced on April 7 that a pinger locator towed from the Australian navy vessel Ocean Shield had picked up two acoustic signals, with one held for more than two hours.

At the time, it described the signals as consistent with flight data or cockpit voice recorders, the most promising lead yet and likely from a man-made source.

JACC’s statement on Thursday came hours after CNN reported that the search had gone back to square one, citing US Navy deputy director of ocean engineering Michael Dean as saying the pings came from some other man-made source unrelated to MH370.

Is a hybrid COVID strain behind Vietnam’s latest wave? Not exactly

“Our best theory at this point is that (the pings were) likely some sound produced by the ship … or within the electronics of the Towed Pinger Locator,” he said, according to the report.

JACC has also confirmed the end of the Bluefin-21 mission, with the underwater drone detecting no signs of aircraft debris since it began scanning the sea floor off the West Australian coast on April 14.

The Bluefin-21 has scoured more than 850 square kilometres of the ocean floor looking for signs of the missing aircraft, but has been constrained by depth operating limits and technical hitches.

Having earlier narrowed down the search area based on the pings, JACC is now casting its net much wider, saying it continues to review all existing radar, satellite and aircraft performance data to define a search zone of up to 60,000 square kilometres in the southern Indian Ocean.

That zone still follows an arc defined by British company Inmarsat based on the final “handshakes” between the Boeing 777 and satellites.

Relatives of the 239 passengers and crew were recently successful in calling for Inmarsat’s data to be publicly released, unconvinced searchers were looking in the right place.

JACC said the findings of the data review would be made public “in due course”.

And it is not only pushing ahead with sea floor mapping in the “defined” search area, it is also adding more vessels to the survey, which is expected to take about three months.

A fresh, potentially deeper underwater search will follow, beginning in August and taking up to 12 months.

A formal request for tender to undertake the search would be released soon, JACC said.

“A single prime contractor will be chosen to bring together and manage the expertise, equipment and vessels to carry out the search,” it said.

MH370 went missing on March 8 about one hour into a night flight from Kuala Lumpur to Beijing.