A message in a bottle claimed to have been discovered on a beach in Western Australia has been confirmed as being authentic and the world's oldest, but some doubt lingers over the find by "renowned ambush marketer". 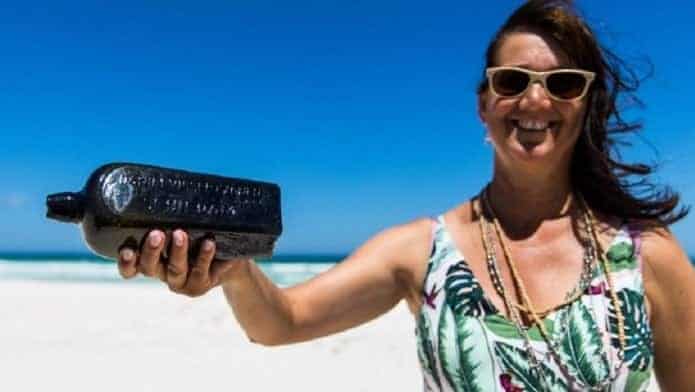 A message in a bottle washed up on a Western Australia beach has been verified as being the world’s oldest known example of such an item, apparently recovered 132 years after being set to sea.

The bottle was claimed to have been found by a group of walkers, nestled in dunes 50 meters inland around 160 kilometers from Perth near Wedge Island. It contained a message written in German, dated 12 June 1866.

One of the group which included the parents of high profile Aussie Formula One driver Daniel Ricciardo, Kym Illman, deciphered the message with his rudimentary German and the help of Google Translate, according to AFP.

Further sleuthing, says Illman, whose wife was first to spot the bottle, put him in contact with various museums. According to the Western Australia Museum, it can be confirmed that such a bottle was tossed from a boat named Paula about 950 kilometers from the WA coast as part of a German oceanographic survey in the 19th century.

“Extraordinary finds need extraordinary evidence to support them, so we contacted colleagues in the Netherlands and Germany for help to find more information,” assistant curator for maritime archaeology at Western Australia Museum, Ross Anderson, said in a statement.

“Incredibly, an archival search in Germany found Paula’s original Meteorological Journal and there was an entry for 12 June 1886 made by the captain, recording a drift bottle having been thrown overboard.

“The date and the coordinates correspond exactly with those on the bottle message.”

According to WA Today, the hand writing of the journal entry exactly matches the writing on the bottle’s message.

Previous to the find, the oldest known authentic message in a bottle was found in 1906 some 108 years after commencing its voyage.

Kym Illman is a ‘renowned “ambush marketer”‘ and is the founder of the business Messages on Hold, but he has rejected the notion that it is all a hoax, according to WA Today.

The German Maritime and Hydrographic Agency has confirmed that the message was identical to those held in their archives in terms of its wording, layout and type of message.

Mr Illman has donated the bottle to the Western Australia museum.

TOP IMAGE: Tonya Illman holding a the bottle which is claimed to have contained a 132-year-old message. (Kym Illman)