On Anzac Day we remember the stories of Australian spirit in the early years of our nation’s history. 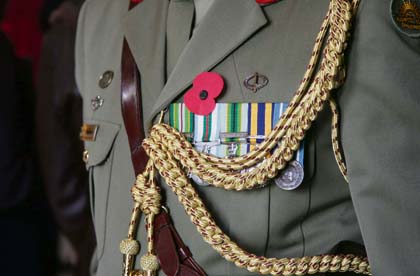 In 1915 Australian and New Zealand troops were defeated in what is now perceived as one of the greatest military disasters of the First World War. As Britain’s ally it was decided that the ANZACs (Australian and New Zealand Army Corp) would help the British invade Turkey and ‘knock them out of the war’. It was Winston Churchill’s initiative to conduct a naval invasion on the shores of Gallipoli, and when the Turks displayed more resistance then originally predicted, it was decided that a land invasion would have to follow.

The ANZACs first landed at Gallipoli at dawn, on 25 April 1915. The Turkish soldiers were waiting on the cliffs of the beach, shooting down all enemies in sight. Those that survived built shelters in the cliff face, living amongst sand bags and being careful not to venture out too far onto the beach. Letters were later found in the trenches, which the ANZACs had attached to watches and photographs to be found after they died. An unknown soldier recounts: ‘They were short of both bombs & ammunition, but were sticking it out, cursing & swearing, as I believe, only Australians can…’

In December the surviving ANZACs were evacuated, by which time over 8,000 Australian men had lost their lives. News soon spread around Australia about the tragedy, but it was not only the deaths and body count of Gallipoli that captured the hearts of our nation. Mateship and courage were ascribed as the distinguishing philosophy of the soldiers at Gallipoli, and became known as ‘the spirit of the ANZACs’. It became a symbol of hope for all soldiers still fighting in the war, and a defining characteristic of our national identity.

This spirit remained with Australians during World War Two, and become more than just an ethos for soldiers, but for anyone who showed human kindness and warm spirit in tough times.

When the Japanese forces landed in Papua New Guinea in July 1942, my great-grandfather was sent with Australian forces to prevent the Japanese from venturing past Kokoda to the shore, where they could more easily invade Australia. The battle is now famously remembered for the friendship and courage shared between the Australian and New Guinea troops who carried thousands of wounded soldiers through the jungle to safety.

My father always told me it was important to remember these stories. Each year on Anzac Day we would wake at dawn and go the service at our local beach. I used to marvel at the soldiers’ uniforms and the way the entire crowd remained silent in respect as the sun rose above the ocean.

This year I’ll be waking at dawn in London to attend the service at the Australian War Memorial along with other Aussies far away from home. I’ll remember my great-grandfather, the men at Gallipoli, and the tragedy of war.

Most importantly, I’ll remember the Anzac spirit. To carry on their tradition of mateship wherever I go, and always remember what it means to be Australian.