Australian hero James Harrison has saved the lives of more than 2 million unborn babies, and continues to do so, at the age of 78. Father and grandfather James Harrison, 78, is an Australian hero.  The 78-year-old’s blood contains rare antibodies which  has enabled countless mothers, including his own daughter, to give birth to healthy babies.

Committed to the cause, Harrison has visited Australian blood banks nearly every week over the last 60 years to donate his life-giving blood. Doctors say the magical blood inside Harrison’s veins has helped create a vaccine that fights Rhesus disease. 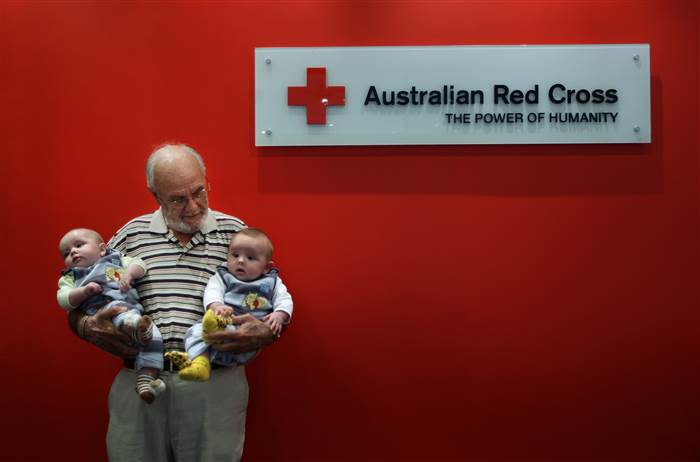 James Harrison 72 (centre) with twin boys Seth Murray O+ (left) and Ethan Murray O-(right) in the Apheresis department at the Australian Red Cross Blood Service. Hundreds of thousands of babies owe their health and in some cases their life to James Harrison as his blood has been used in every dose of anti-D serum since 1967, which is given when the blood types of mothers and babies are incompatible.

“I’ve met quite a few of the mothers and they thanked me,” Harrison told Today.com. “One had lost three kids and had seven healthy children after the injection. Maybe I’m responsible for the country’s overpopulation! It’s great to see them happy and their babies happy.”

According to the National Institute of Health website Rhesus disease happens when a pregnant woman has Rh-negative blood and the baby in her womb has Rh-positive blood.  This incompatibility can be extremely dangerous and even deadly to the unborn child. When this occurs during pregnancy, a mother’s blood can create anti-bodies that attack the unborn baby’s red blood cells, destroying them.

Women not treated for rhesus disease may have miscarriages, or babies can suffer brain damage, seizures, and problems with movement, hearing and speech. But Harrison, known as the man with the “Golden Arm”, donates his extraordinary O-negative blood to help prevent women with rhesus-negative blood from developing RhD antibodies during pregnancy.

This week Harrison donated his 1106th unit of life-giving blood.

At just 14 year old Harrison underwent surgery to remove a lung and required more almost 10 liters of blood. While Harrison’s father gave blood many other donors helped him survive and so Harrison decided he would give blood as soon as he was old enough.

Two days after his 18th birthday in 1955, he made his first donation, but it wasn’t until years later when doctors discovered his blood had special antibodies. He was in Australia’s first trial to produce anti-D serum in 1967, and his powerful plasma has been used in vaccines ever since. 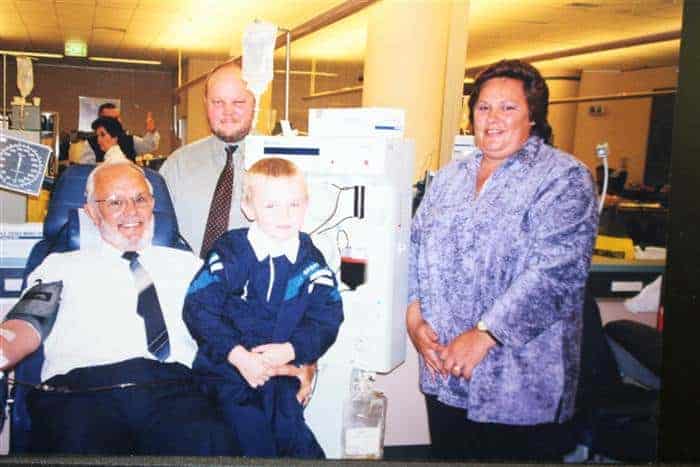 One of the babies he saved was his own grandson, Scott, now 20, after his daughter needed her father’s lifesaving blood to protect her unborn baby from her RhD-negative blood.

“My good anti-bodies killed her bad ones and she could conceive again after getting the injection,” Harrison said. “Most girls need their mum, but in this case she needed her dad. That was good.” 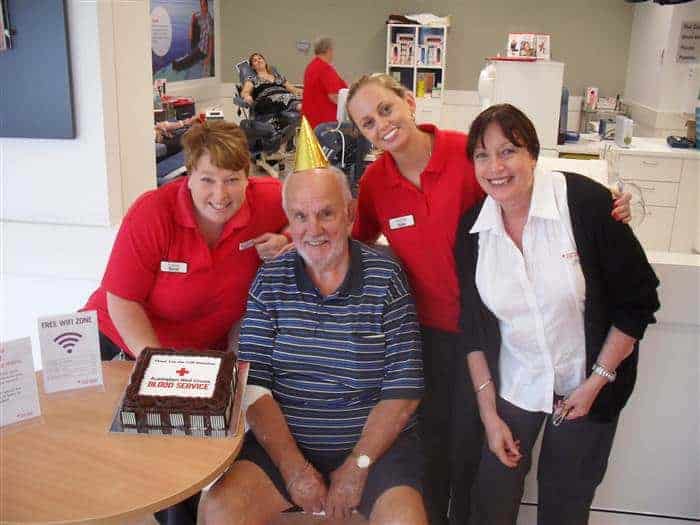 Aid workers at the Australian Red Cross Blood Service see Harrison as a hero and an advocate. “James has been donating blood for nearly 60 years so we are a close-knit community. He walks around the floor talking to people, the nurses make him tea … he’s a friend to many people at the blood service,” Jemma Falkenmire, a Blood Service spokesperson told Today.com.

The Australian Red Cross currently has 150 participants who donate their blood plasma to help create the anti-D vaccine. The antibodies naturally occur in only about 50 of them but others have received the anti-bodies to stimulate their production, but their bodies don’t make them naturally. But none of the present donors have antibodies as robust as Harrison’s, which is a concern.

The program restricts anyone from donating after the age of 81 so Harrison only has a few years left to give. Red Cross workers are hoping others with his rare blood plasma will step up to ensure more lives are saved.

“James thinks he’s a regular guy. It isn’t just his blood which is unique and precious, but how humble he is. He never fails to show up,” Falkenmire said. 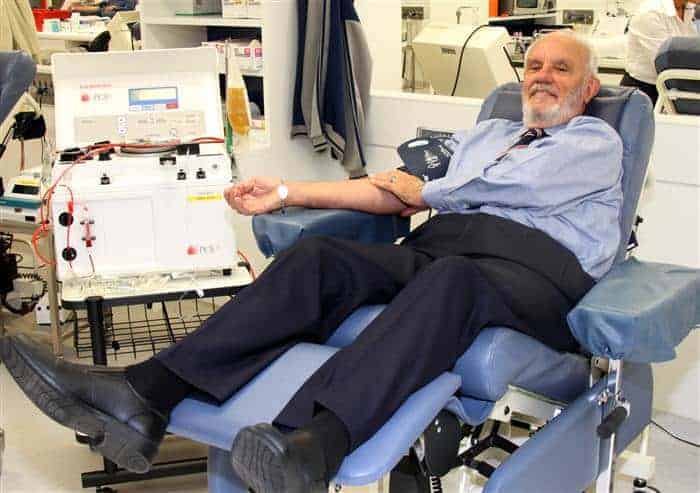 Harrison is committed but there is one thing he won’t do. “I can’t stand pain and I’ve never once watched the needle go into my arm. So if I can do it anybody can do it.”

Harrison say she hopes his story will motivate others around the world to donate blood on World Blood Donor Day, this Sunday, June 14.

“Their first visit is no less important than mine. I save lives in a different way but even donating just one time can save a life,” Harrison said.

Tags: AustralianWe Can Be Heroes