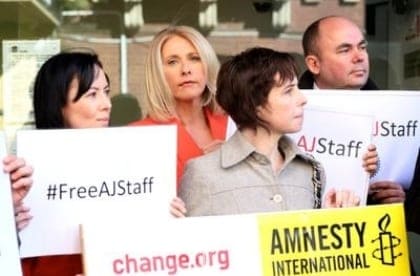 Senior Australian journalists are adding their voices to a global campaign to free journalist Peter Greste and his colleagues from an Egyptian jail.

Network Ten news anchor Hugh Riminton and Sky News journalist Tracy Spicer delivered a statement on behalf of around 100 media and human rights organisations to the Egyptian consulate in Sydney on Monday.

“We urge the Egyptian government to overturn the verdict so that it is not a precedent to be used against other journalists in the future,” the statement read.

“We urge that both local and foreign journalists working in Egypt be free to carry out their duties without harassment, intimidation or violence.”

Mr Greste and his Al Jazeera colleagues Mohamed Fahmy and Baher Mohamed were found guilty last week of reporting false news in the wake of the 2013 coup that ousted Islamist president Mohamed Morsi.

The Australian reporter was given a seven-year sentence.

They were also convicted of supporting Morsi’s Muslim Brotherhood, which was declared a terrorist organisation after the coup.

After 30 minutes inside the consulate, Mr Riminton told reporters of his “useful” conversation with vice-consul Ahmed Farid.

“He was happy to say that the Egyptian government, and he personally, understands the anger and the anxiety that Australians are feeling about this verdict,” Mr Riminton said outside the consulate.

Mr Farid reminded the journalists that Mr Greste and the other detained journalists could still appeal the verdicts.

“He did say that he feels sure that Peter Greste and the other journalists, this is a direct quote, ‘will get the just treatment that they deserve’,” Mr Riminton said.

“I think we all felt there was something there in the form of encouragement, that this is being properly assessed by the authorities in Egypt and that there might be a better outcome.” – AAP