A man has been charged in London today after a portrait of Queen Elizabeth II by Australian artist Ralph Heimans was defaced at Westminster Abbey. 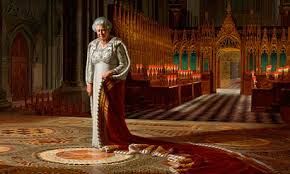 A MAN has been charged in London today after a portrait of Queen Elizabeth II by Australian artist Ralph Heimans was defaced at Westminster Abbey.

The oil painting by Mr Heimans, a Sydney-born artist, is titled “The Coronation Theatre” and was commissioned last year to mark the Queen’s 60 years on the throne.

A 41-year-old man, of Doncaster in northern England, was charged with criminal damage over £5,000 for allegedly trying to spray paint the word “Help” on the portrait of the monarch.

A spokeswoman for the abbey said that in an incident on Thursday, a visitor to the abbey sprayed paint on the Heimans painting.

“Until work can be done to remedy the damage it will – very regrettably – not be possible to have the painting on public view,” the spokeswoman said.

Fathers4Justice claimed the criminal damage was part of a Father’s Day protest by one of their members.

Mr Heimans said at the time of its first public unveiling: “Through the narrative of the portrait I wanted to produce a work of particular significance for the Diamond Jubilee.

“By representing the Queen as she reflects on this incredible milestone in her life, I wanted to explore the dynamic between her public role and the personal, emotional dimension.”

The painting had been due to be on display until 27 September.