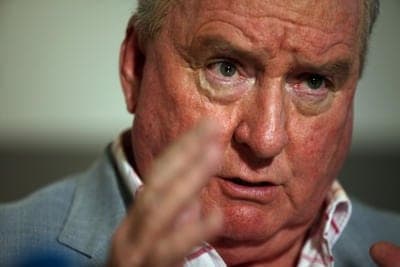 Malcolm Turnbull has locked horns with Alan Jones, accusing the broadcaster of doing Labor’s job by undermining the Abbott government with leadership speculation.

In a lengthy and fiery exchange, the federal communications minister has told the Sydney radio personality that he’s a “bomb thrower” who can dish it out but can’t take it.

Mr Jones kicked off the Thursday interview by telling Mr Turnbull to “say after me” that he supports the budget.

“Alan, I am not going to take dictation from you, I am a cabinet minister,” Mr Turnbull responded, but went on to say he “unreservedly” supported every element of the budget.

The pair then moved on to Liberal leadership speculation.

“You have no hope ever of being the leader, you have got to get that into your head,” Mr Jones said.

What is ammonium nitrate, the chemical that exploded in Beirut?

“No hope ever. But because of that you’re happy to chuck a few bombs around that might blow up Abbott a bit. That’s what they’re saying.”

But Mr Turnbull said that he and Prime Minister Tony Abbott were a team and he had been “distressed” that conservative commentators such as Mr Jones and Andrew Bolt had been suggesting otherwise.

“This is the most united and cohesive government we’ve had in this country for a long time and I think it’s just very sad that you and Bolt are doing the work of the Labor party in undermining the Abbott government,” he said.

“You are,” said Mr Turnbull.

Jones accused Mr Turnbull of having “a few sensitive nerves”.

“The problem with you, Alan, is that you like to dish it out but you don’t like to take it,” Mr Turnbull responded.

Treasurer Joe Hockey leapt to Mr Turnbull’s defence, saying he was doing his best to sell the budget message.

“Malcolm is putting in a huge effort as we all are in endeavouring to focus on the policies of the budget rather than the politics,” Mr Hockey told Sky News on Thursday.

Opposition Leader Bill Shorten said he believed Mr Turnbull “doth protest too much”, and there was cleary division in the Liberal Party.

“I don’t give a toss about the internals of the Liberal Party.”

Australian embassy to Lebanon severely damaged by a massive Beirut explosion which has injured consular staff and left one Australian...

Whether you are a one-man-band or a large business that has many employees then we’re sure you’ll find something here...

The Lebanese capital Beirut was rocked on Tuesday evening local time by an explosion that has killed at least 78...

When the pandemic broke, the cruise industry was decimated as its ships became floating outbreaks. Efforts to kick-start it are...

As Victorians face yet another long period of enforced lockdown, serious concerns are being raised about people’s capacity to comply.