Former Liberal PM Malcolm Fraser will campaign with the Greens to stop Opposition Leader Tony Abbott from controlling the Senate if he wins the election. 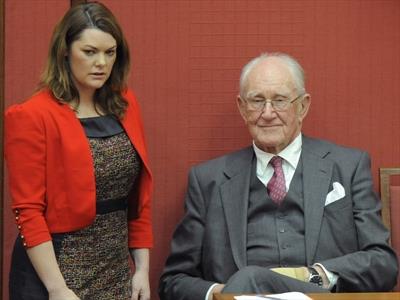 Mr Fraser will support Ms Hanson-Young at a question and answer event in Adelaide. Ms Hanson-Young is competing against the Liberal Party for the sixth and last Senate spot in South Australia.

Mr Fraser controlled the Senate for the first five years of his three-term prime ministership, from 1975 to 1980, but he is now estranged from the Liberal Party, which he left in 2009, saying it had become too conservative.

The Greens have been calling on voters to keep them in the Senate to prevent opposition leader Tony Abbott from controlling both houses of parliament, although the return of Kevin Rudd as prime minister indicates a mammoth coalition victory is less likely.

Senator Hanson-Young and Mr Fraser will co-host a sold-out public question and answer forum at an inner-city Adelaide cinema on Saturday afternoon.

Mr Fraser is very critical of both major parties’ policies on asylum seekers, as is Senator Hanson-Young, the Greens spokeswoman on the issue.

Mr Fraser today told The Guardian he was not campaigning for the Greens Party, but supporting Ms Hanson-Young in a personal capacity because of her position on asylum seekers.

“What the major parties do not want to admit to is that our policies on asylum seekers have done Australia very, very grave harm,” he said.

“Mandatory detention is not necessary; when people want or hope to get a visa to stay in Australia, they are not going to abscond.

“During my time in government, the immigration department proposed mandatory detention centres several times. We regarded the proposal as barbarous, and we rejected it.”

“It’s not surprising,” Mr Briggs told Sky News. “Malcolm Fraser has made his views known on these issues for a very long time.

“Malcolm Fraser’s entitled as a citizen to his views. We don’t agree with them.”