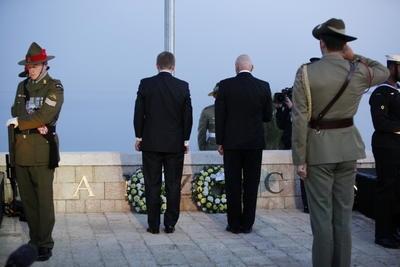 A solemn dawn service at Anzac Cove in Gallipoli has been disrupted by a lone protester upset with the Australian government.

Turkish authorities say the man, who gave his name as Ali Risa Ersoy, is an Australian citizen.

The protester produced an Australian passport after being detained by police. 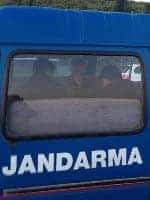 The man was eventually led away from the commemorative site and questioned by the Turkish Gendarmerie 200m away in a van parked on Anzac Cove Road.

A Turkish newspaper reporter told AAP the man had been yelling: “The Australian police are trying to kill me.”

When the reporter asked him why, Ali Risa Ersoy made a vague reference to someone being a criminal.

A local officer later told Australian reporters the man had not been arrested but was being “interrogated”.

A judicial process would now play out, the officer said, adding the protester appeared to have a problem with the Australian government.

As Ali Risa Ersoy was transferred from the Gendarmerie van to an unmarked car he yelled: “The scandal is with the government.”

The rest of the dawn service ran as scheduled without interruption.

The protester reportedly said he was a dual national with both Turkish and Australian citizenship. 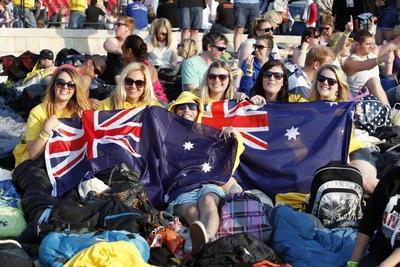 IMAGE: Australians in the crowd during Anzac commemorative services in Gallipoli, Turkey, Thursday, April 25, 2013. Australia and New Zealand are commemorating the 98th anniversary of the landing at Gallipoli during WW1. (Australian Government)

A Veterans Affairs spokeswoman later said the incident didn’t detract from the significance of the dawn service.

“This was an isolated incident by a lone protester that was dealt with accordingly by the appropriate authorities – the Turkish police,” she said in a statement to AAP.