Australia and London are becoming more cycle friendly in a bid to ease traffic congestion frustrations and limit emissions.

Thousands of Londoners are expected to take to two wheels this summer as part of Transport for London’s (TfL’s) London Cycle Challenge. The Challenge, which takes place in June, will see organisations and individuals compete against each other for titles and prizes. Registration has now opened and there will be more than 100 prizes available for participants. The London Cycle Challenge will run between 8 and 28 June, and will give Londoners and commuters the added incentive to get to work on two wheels, or just enjoy a weekend ride. Any ride of ten minutes or more counts in the Challenge.

Ben Plowden, Director of Strategy and Planning at TfL Surface Transport, said: “Getting more people cycling safer and more often is our aim. As cycling has now become an integral part of the Capital’s transport network, the London Cycle Challenge will give everyone working in London that extra boost to make their trips in the saddle.”

The challenge will encourage even more people to join the Capital’s cycling trend and take to two wheels – last year the Office of National Statistics showed that between 2001 and 2011, the number of people living in London that cycled to work more than doubled from 77,000 to 155,000 in 2011.

Down Under Aussies can also oil their wheels and dig out the old bicycle pump as Perth is set to be one of the cities to improve their bicycle friendliness in an effort to ease peak hour congestion while becoming greener too.

Announced in May Perth city bosses plan on spending $75m to turn Perth into a cycle city. 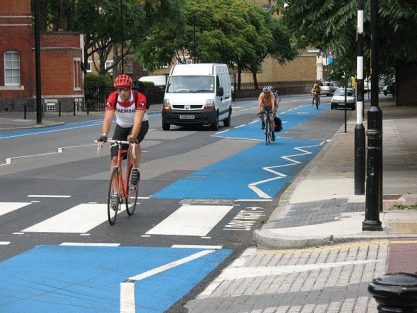 A further $37 million is expected in renewed cycling grants will focus on new cycle paths on railway and freeway reserves within 15km of central Perth.

He said the Government was determined to create an integrated system that gave transport options to get to and from work, leisure and other destinations.

“Cycling infrastructure needs to be considered an important part of all major transport projects, so with every major new road constructed by this Government, you will likely find a new bike path,” Mr Nalder said.

Nalder added that the Government had spent $101.6 million over six years on cycling networks, resulting in 221km of off-road shared paths and 71km of on-road bike lanes.

The $37.71 million in the Budget for local government grants over four years would be for cycling infrastructure and to develop bike plans.

In Adelaide Bikedirect is a network of bicycle routes across the Adelaide metropolitan area that was developed to encourage cycling. The Bikedirect maps provide options for people with different needs and abilities and show main roads, bicycle lanes, local streets and off-road paths.

While in Sydney more and more Sydneysiders are riding bikes, with a 100% increase over the past 3 years. Twice as many are riding bikes for transport than the national average, and some 31,600 City of Sydney residents get on a bike in a typical week.  This is according to a 2013 Australian Bicycle Council survey.

The city is supporting this growth in cycling by building a 200km bike network which includes dedicated bike paths separating riders from traffic and pedestrians.