The Metropolitan Police have pulled back their round-the-clock watch of the Ecuadorian embassy in London but say the WikiLeaks founder will still be arrested if he leaves.

Police have officially abandoned their round-the-clock guard of the Ecuadorian embassy in London where Julian Assange has taken refuge for three years.

“A significant amount of time has passed since Julian Assange entered the embassy, and despite the efforts of many people there is no imminent prospect of a diplomatic or legal resolution to this issue,” the Metropolitan Police said in a statement via email. 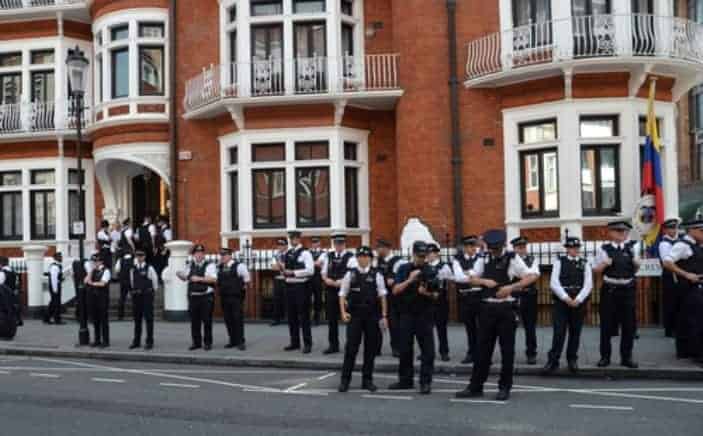 The Australian WikiLeaks founder took refuge in the embassy in London’s Knightsbridge in 2012 to avoid extradition to Sweden to answer allegations by two women of unlawful coercion, rape and sexual molestation.

Assange claims that if he was extradited to Sweden he would subsequently be extradited to the United States to face prosecution and probable imprisonment over his WikiLeaks activities.

However, the Swedish statute of limitations on some of Assange’s alleged offences expired in August, leading to speculation that the country’s extradition request against him may soon be dropped, leaving Assange free to leave the embassy.

For now, London’s police have said that despite the pullback of the 24-hour watch the extradition order still applies and every effort would be made to arrest Julian Assange should he step foot outside of the Ecuadorian embassy.