Australians Seamus Donaghue and Heath Jamieson are among a group of wounded ex-servicemen and women taking part in Sunday's London Marathon. 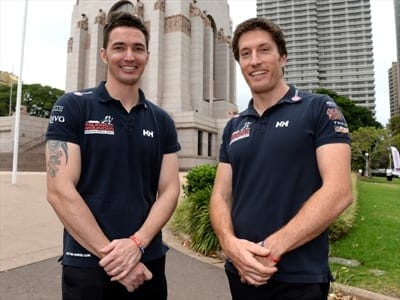 After conquering the brutal cold and wind of the South Pole, taking to the streets of London might seem like a breeze.

But for Australian Seamus Donaghue and a group of fellow wounded soldiers, lining up in Sunday’s London Marathon will represent another daunting challenge.

Corporal Donaghue and compatriot Private Heath Jamieson are part of the Walking with the Wounded team preparing for another journey together following their successful Antarctic expedition in December.

Joined by Prince Harry, the group skied 335km during a two-week expedition aimed at raising awareness for wounded ex-servicemen and women.

Harry won’t be alongside them this time, but the soldiers will join about 35,000 others in one of the largest mass-participation events in the world.

Cpl Donaghue admits he won’t miss the “phenomenal” temperatures of minus 35 degrees celsius and fierce polar winds on Sunday, but says the marathon will throw up its own challenges.

“Antarctica was a different kettle of fish,” Cpl Donaghue said.

“It was prolonged days of skiing and in extreme temperatures, which was tough, but 42km in a few hours is ridiculous.”

A strong runner before being wounded, Cpl Donaghue hasn’t been able to return to full pace since being shot in the right thigh while serving in Afghanistan in 2010.

The shot shattered his femur and left him with nerve damage in his leg.

With a new orthotic device fitted on his right leg only a fortnight ago, Cpl Donaghue says he’ll have to take it easy during the race.

“I can’t physically run it, I’ll be in the slower group, but it’s just about being able to manage that amount of work and getting to the finish,” Cpl Donaghue said.

“Clocking 42kms is going to be a test because with this sort if thing (orthotic device) there’s a lot of friction going through it.

“It’s a gradual return to running for me but I’m hoping I’ll be able to do it eventually.

“I might be doing some shuttle runs to and from the pubs.”

Both Australian soldiers are hoping to complete the London Marathon inside six hours while a “more steady” group of six of the 13 Walking for the Wounded team members will attempt to break around four-and-a-half hours.

Britain’s London Olympic track hero Mo Farah will make his full marathon debut on Sunday but there are no Australians in the elite men’s and women’s races.