Former cabinet minister Joel Fitzgibbon has openly ridiculed Labor HQ in the wake of opinion polls showing the government heading for a massive defeat, whilst backbencher Graham Perrett likened the situation ahead of the 14 September federal election to an Indiana Jones movie. 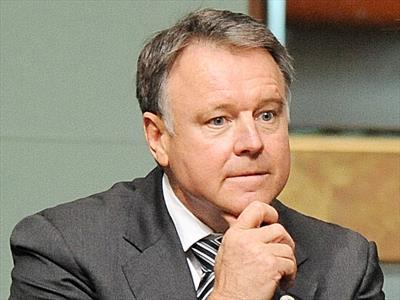 A LEADING Labor figure has mocked his party’s response to the latest opinion polls showing the Gillard government heading for a massive defeat at the 14 September election.

Newspoll, published in The Australian on Tuesday, has the coalition stretching its lead over Labor to 16 points.

If the 58-42 per cent poll result was repeated at the September election, Labor’s representation in parliament would be nearly halved to 37 seats, ABC election analyst Antony Green predicts.

Labor backbencher Graham Perrett summed up the mood among his colleagues when he told the ABC: “We’re in more trouble than Indiana Jones.”

Mr Perrett’s seat of Moreton, in suburban Brisbane, would be one of the first Labor seats to go on election night.

Down south a Herald-Sun poll shows Labor facing massive swings against it in Victoria.

Attorney-General Mark Dreyfus would lose his seat of Isaacs on a 15.4 per cent swing against Labor, the poll predicts.

“I bought the manual with me. I’ll see what it says,” he told the Seven Network.

“It says I should say polls come and go and the only poll that counts is the poll on election day.”

Government senator Doug Cameron is also unhappy with the Labor leadership, saying their assurances about a J-curve in voter support had not eventuated.

Despite Tony Abbott widening the gap on Julia Gillard as preferred prime minister to eight points, there’s little stomach amongst Labor MPs for a change of leader.

Frontbencher Yvette D’Ath insisted Ms Gillard had the support of caucus, saying it had made the right decision to reject the return of Kevin Rudd.

“That issue has been put to bed,” she said.

“These polls seem to be not so much within the margin of error as the margin of disaster,” he said, adding the government MPs he had spoken to were pretty despondent.

Independent MP Tony Windsor, on whose support the government relies, said Labor had taken a hit in the wake of last week’s furore over electoral funding.

He said support for independents remained significantly higher than at the 2010 election, reflecting the electorate’s view of the major parties.

“We know people want a change, but we also know we need to earn their votes and earn their trust, and in the next 101 days that’s all we’ll be doing.” – AAP