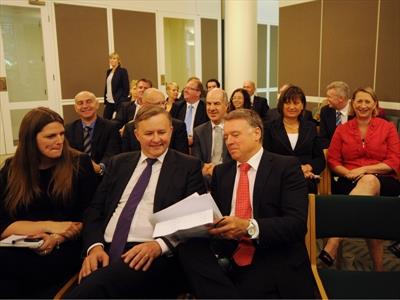 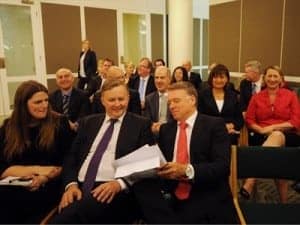 OPPOSITION Leader Bill Shorten declared zero tolerance on disunity as he unveiled Labor’s shadow frontbench, but it failed to stop angry outbursts from some who missed out.

Anna Burke lashed out at the “faceless men” of Labor after failing to get the chief opposition whip job, saying caucus voted on deals done beforehand rather than on merit.

“Our new leader Bill Shorten may hope for no rancour in the caucus, but the current outcome of the shadow ministry reflects an immediate reversion to the faceless men being firmly in control,” she wrote on the Guardian Australia website.

Party infighting and the conflict between Julia Gillard and Kevin Rudd were key reasons voters turned on the Labor government at the September 7 election.

He has returned to the pre-Rudd era process of having the caucus elect the frontbench before he appoints portfolios.

“It is a big rebuilding job for Labor to rebuild the confidence of people who’ve stopped voting for us,” he said.

The left’s leadership contender, Anthony Albanese, was not named in the leadership team, but will get a senior portfolio when Mr Shorten announces them on Friday.

Mr Shorten said there were plenty of talented women in Labor’s ranks and the opposition, with 11 women in shadow cabinet, would have more female cabinet members than the government.

But unity could be more problematic.

The Left faction dumped former ministers Warren Snowdon and Kate Lundy over their support for Mr Shorten in the leadership contest.

The right’s Don Farrell was named in the front bench even though he loses his Senate seat next July.

Mr Snowdon reportedly complained in the caucus meeting about side deals and stitch-ups.

“You can’t have small groups of people meeting as a cabal deciding on who should be the shadow ministers, which in effect was what happened today,” he later told the ABC.

But the new leader said the party could be made more diverse and representational of the community.

However, CFMEU national secretary Dave Noonan called for the union influence to be widened, saying all affiliated union members – whether Labor members or not – should be given a vote in party matters.

“Giving union members a direct say would mean more than a million working Australians would have a chance participate in pre-selections in addition to the forty thousand members of the ALP,” he told the CFMEU’s national conference in Cairns on Monday.

The first shadow cabinet meeting will be on 21 October.