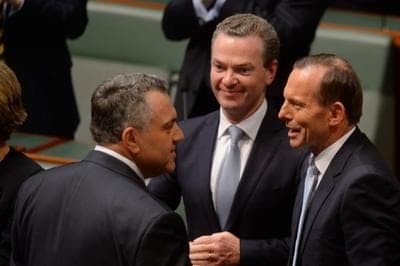 Labor says the Abbott government’s first budget is full of broken promises, cruel cuts and unfair rises in the cost of living.

Prime Minister Tony Abbott had promised at the election there would be no new taxes or tax rises, no cuts to education or health and no changes to pensions, shadow treasurer Chris Bowen said.

But the budget had delivered all these.

“It is a budget built on Tony Abbott’s act of mass deceit at the last election,” he said in a statement on Tuesday.

“Every family in Australia would be hit by new taxes and cost-of-living increases.”

The economic growth centrepiece of the budget – a $50 billion infrastructure package – was nothing more than an “amateur con”.

Mr Bowen said the small number of new road projects had been funded by cuts to public transport projects, local roads funding and a tax on every motorist.

IMAGE: Federal treasurer Joe Hockey is congratulated by Chris Pyme and Prime Minister Tony Abbott after he delivered his first budget to the House of Representatives at Parliament House Canberra, Tuesday, May 13, 2014. (AAP Image/Alan Porritt)