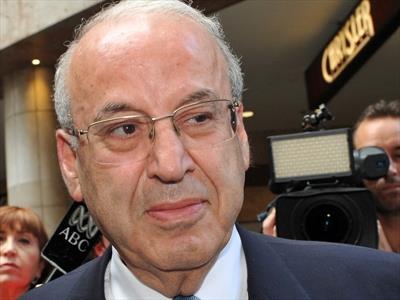 FORMER NSW Labor heavyweights Eddie Obeid and Ian Macdonald say they will fight to clear their names with the state’s corruption watchdog recommending possible criminal charges against them.

The disgraced duo could serve time in prison if found guilty by the courts and there are calls for their assets to be immediately seized.

“I have nothing but disdain for their actions,” NSW Opposition Leader John Robertson said of his former colleagues.

“I want to see these people prosecuted and feel the full brunt of the law, and if found guilty serve time.”

Federal Opposition leader Tony Abbott described it as “a black day in the history of the Labor party.”

But Eddie Obeid said the report was biased and both he and Mr Macdonald have vowed to seek review through the courts.

The Independent Commission Against Corruption (ICAC) recommended the DPP consider prosecuting Mr Macdonald – a former mining minister – and powerbroker Mr Obeid for conspiracy to defraud and misconduct in public office.

Mr Obeid’s son, Moses, and four high-profile businessmen were also been found to have acted corruptly over a coal mine at Mount Penny.

The ICAC found Mr Macdonald rigged a 2008 tender process to grant a coal licence over the land owned by the Obeids, enabling the family to make $30 million, with the prospect of earning at least $70 million more.

“What we have seen is an appalling abuse of public trust to advance personal interest,” Mr Robertson said.

Information about the dodgy mine deal has been referred by ICAC to the NSW Crime Commission, the ATO and the Australian Securities and Investments Commission.

ICAC found evidence of possible breaches of the Corporations Act and NSW Premier Barry O’Farrell is under pressure to scratch the mine altogether.

The Crime Commission is also being called upon to ask the Supreme Court to seize relevant assets held by Mr Obeid and Mr Macdonald.

“We urge them to rescue at least some of the hundreds of millions of dollars that the state lost to corruption,” said Greens MP John Kaye.

“NSW will take decades to recover from the impacts of Macdonald, Obeid and their mates.”

Mr Obeid was “an aggressive witness and seemed to be more concerned with imposing his will on the proceedings than simply telling the truth”.

His son, Moses, was “willing to lie or mislead whenever it suited his purpose”.

Following the largest corruption investigation in NSW history, the ICAC on Wednesday handed down three reports recommending possible action against a total of 11 people, including Moses Obeid’s brother Paul.

The DPP will consider a brief of evidence from the ICAC before deciding whether to pursue charges.

All of the major players have categorically denied any wrongdoing and vowed to fight any court action.

Mr Obeid has called the ICAC report “superficial” while Mr Macdonald said the findings weren’t “justified by the evidence”.

Both men were expelled from the Labor Party earlier this year.

Former Treasurer Eric Roozendaal, who was cleared of any wrongdoing over a car deal, said he was “glad we can move on now”.

In a separate investigation, Mr Macdonald was found to have acted corruptly by accepting the services of a prostitute, Tiffanie, in return for arranging meetings between the businessman Ron Medich and executives from a state-run power company.

Mr Robertson has called for Mr O’Farrell to appoint a special prosecutor to take the matters through court.

“No stone should be left unturned and no effort should be reserved in ensuring we see all of these individuals feel the full brunt of the law,” he said. – AAP