With one day left for London Aussies to cast their votes at Australia House, an exit poll conducted by Australian Times shows a swing towards the coalition in the 2013 election, despite Labor leading on a two party preferred basis. 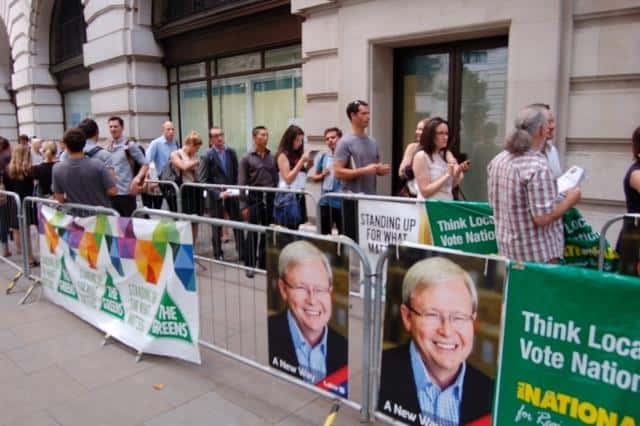 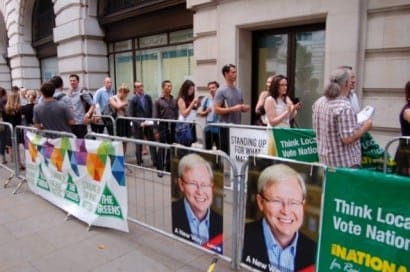 AN exit poll conducted by Australian Times at prepolling facilities at Australia House on Thursday night indicate a strong swing towards the Liberal Party, despite Labor pulling ahead on a two party preferred basis – 56 per cent to 44 percent.

See: How to vote at Australia House

Following the casting of their ballots, we asked 100 voters who they voted for in the House of Representatives and the Senate.

Australia House is historically a strong polling station for Labor and more recently for the Greens, reflecting the traditionally progressive nature of the expat community, dominated as it is by younger voters.

However, as the demographic of the London Aussie community has evolved over the last decade – with fewer backpackers and more working professionals – apparently so has its voting habits.

In an Australian Times London exit poll held during the 2010 election, Labor held Australia House 63 per cent to Liberal/National 37 per cent on a two party preferred basis, suggesting a significant swing away from Labor this time around.

Similarly, the Green primary vote appears to have slipped significantly since the last election, down to 21% from 32% across the two polls. 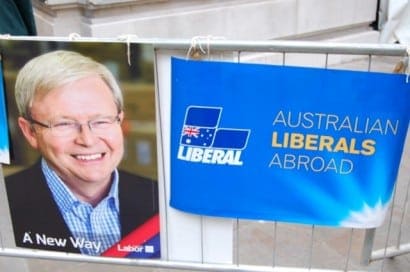 A confident Jason Groves, president of Australian Liberals Abroad, told Australian Times he was extremely encouraged by the polling results which suggest a clear margin lead for the coalition in the primary vote.

“We are aiming to win Australia House on first preferences for the first time, but it’s not over yet,” Mr Groves said.

Issues such as the economy, and the reputation of Australia overseas, seemed to be issues motivating a number of voters who talked to Australian Times.

Paul, who works in finance in London, saw the coalition as offering the best choice in terms of Australia’s economy and thought it was important to continue to vote while living overseas.

“The right to vote is a privilege, and we shouldn’t give that away,” said Paul.

However many voters who supported Labor or Greens seemed disheartened with the prospect of a Liberal victory.

“I think we’ll look back and wonder whether we made the correct choices,” said Aaron, a writer who had been living in London for one year.

“It is rare that there has been an election that is so important.” 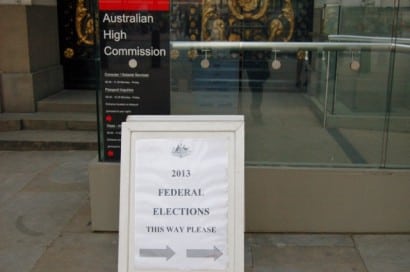 In the last election, over 16,000 Australians cast their vote from the UK and the High Commission were expecting similar numbers this year.

With only one day left for Australians in London to cast their votes, the after-work crowds outside the High Commission on Thursday spilled out across the footpath.

Many commented on the festive attitude, saying the voting experience was a taste of home in the middle of London, despite the lack of sausage sizzle.

“The line didn’t take as long as I thought,” said Laura from Sydney.

“I wish there had been lamingtons though.”

Booth workers in brightly coloured t-shirts tried everything they could to convince those still undecided.

A number of voters indicated it had been difficult to make a choice, their decision coming down to the wire once inside the chandeliered and marble-coated interior of the polling booth.

“The options in this election were quite poor, and the quality of political debate has been embarrassing to watch from overseas,” said David, who also works in finance in London.

“In the end I voted for the coalition.”