The Queen has agreed to a request from Prime Minister Tony Abbott to restore knights and dames in Australian honours. 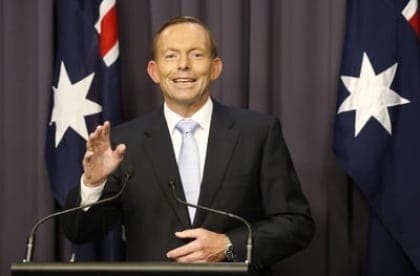 Prime Minister Tony Abbott insists he’s not bringing knights and dames back in the Australian honours system to lock Australia into the monarchy.

Retiring Governor-General Quentin Bryce has become a dame and her successor Peter Cosgrove will become a knight, after Mr Abbott asked the Queen to restore the system of pre-eminent honours.

The honours category, which was removed in 1986, will recognise extraordinary and pre-eminent Australians for their service to Australia or humanity. Up to four knights or dames can be appointed each year.

“I believe this is an important grace note in our national life,” Mr Abbott said on Tuesday.

Mr Abbott, a former director of Australians for a Constitutional Monarchy, defended the decision, saying it would enhance the dignity of the existing system.

Asked whether he was seeking to cement the monarchy into Australian life, Mr Abbott said: “No, I’m not.”

“Everyone knows where I stand on this particular issue,” he said.

“I am a staunch supporter of our existing constitutional arrangements – always have been and, I imagine, always will be.

“But … I think it is entirely appropriate that someone who represents the monarch should be honoured in this way.”

“This is turning the clock back to a colonial frame of mind that we have outgrown as a nation,” he said.

“Our identity today is Australian, so our national honours should be thoroughly Australian.”

The prime minister consulted Dame Quentin and General Cosgrove on the proposition and said they were happy to accept.

Shadow attorney-general Mark Dreyfus said the move showed the government was rushing back to the 19th century.

Dame Quentin’s son-in-law, Opposition Leader Bill Shorten, said the government had a plan for knights and dames but no plan for job creation.

“I’m concerned the Abbott government thinks this is a priority – what about jobs, health and education?”

“Bring on a republic,” she said.

Palmer United Party leader Clive Palmer joked on Twitter that he probably would not be up for such an honour.

IMAGE:Prime Minister Tony Abbott during a press conference on the Order of Australia at Parliament House in Canberra, Tuesday, March 25, 2014. (AAP Image/Daniel Munoz)