Boy with severed head image appears on Twitter account of Khaled Sharrouf, with the caption “That’s my boy!” 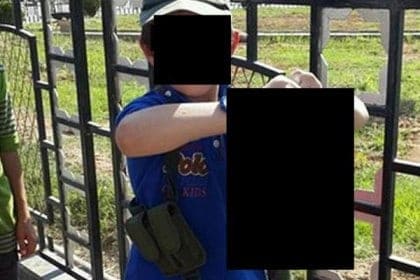 An image that can only be described as shocking has been posted on Twitter, apparently by Australian jihadist Khaled Sharrouf.

In the photo, a young boy who is reportedly the son of the Islamic State fighter from Sydney is holding the severed head of a slain man who has been decapitated.

The image (above, but with the faces blackened out) was posted on Khaled Sharrouf’s Twitter account with the caption “That’s my boy!”. The child appears to be struggling to hold the dead man’s head up with both arms.

It was one of several barbaric photos published on Sharrouf’s account, others showing the convicted Australian terrorist apparently posing with his three sons who are all holding guns, the flag of the Islamic State visible behind them.

Sharrouf travelled to Syria last year to join the militant Islamic fundamentalist group ISIS – also known as ISIL and now calling themselves the Islamic State (IS) – which has cut a blood soaked swathe across Syria and Iraq, the goal being to establish an Islamic caliphate.

Convicted terrorist Sharrouf is wanted by Australian Federal Police over crimes in Syria and Iraq, including the execution of an Iraqi official.

Australia’s prime minister, Tony Abbott, has deplored the shocking images as another example of the “hideous atrocities” jihadist groups like the Islamic State were capable of.

“We see more and more evidence of just how barbaric this particular entity is,” he said.

Australian Defence Minister David Johnston told the ABC he was “revolted“, emphasising that the photos were a “shocking misrepresentation” of Muslims and Islam.

“I’m very upset about this sort of thing completely colouring our view of Muslims,” Johnston said. “The vast majority of Muslims are peace-loving and peaceful people.”