Former PM Kevin Rudd is to chair the National Apology Foundation, which he has established to honour the 2008 apology to Indigenous Australians. 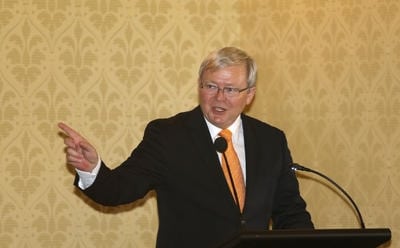 Former prime minister Kevin Rudd is creating a foundation to honour the principles of his historic 2008 apology to the indigenous stolen generation.

Mr Rudd on Friday announced he would establish the National Apology Foundation, which he will chair.

Former Liberal MP Bruce Baird will be his deputy.

The foundation will be launched at a fundraising function by the end of the year, with a key mandate to ensure the apology remains in the national memory in future.

It will also monitor progress and develop ways to close the gap between indigenous and non-indigenous Australians.

“Rather than trying to hide our indigenous origins from the rest of the world, instead (we should be) fully embracing our indigenous identity as part of our wider national identity,” Mr Rudd told a gathering in Sydney on Friday.

“We are not condemned to a future which sees a continuing division between the lives of indigenous and non-indigenous Australians.”