Prime Minister Kevin Rudd has called in a team of election campaign heavyweights from the US to lead a social media onslaught against the Coalition. The team includes British social media expert Matthew McGregor, labelled Obama's 'digital attack dog' during the 2012 US campaign. 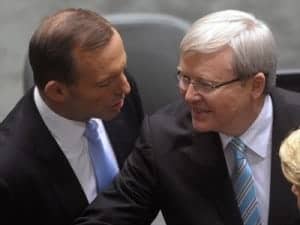 PRIME MINISTER Kevin Rudd has stepped up his campaign to defeat Tony Abbott by hiring a team of strategists who helped US President Barack Obama to his two election wins.

Among them is British social media expert Matthew McGregor, renowned for his use of video and blogs to ruthlessly attack his opponents through humour and ridicule.

Dubbed “Barack Obama’s digital attack dog,” during the 2012 US election campaign McGregor exploited every Republican gaffe via social media, often within minutes or hours of them taking place.

Joining him on Team Rudd is Tom McMahon, the former executive director of the powerful Democratic National Committee during President Obama’s last campaign and Joon Kim of the consulting firm New Partners.

“We will draw upon the best brains in the world,” Mr Rudd said of his campaign team.

”I’ve always been a strong supporter of President Obama, both in his leadership in the world also his message to the American people.”

Speculation is mounting that Mr Rudd may call an election for 7 September, following the release of the government’s economic statement in the coming days.

The report is possibly the last item of business before Mr Rudd visits the Governor-General for permission to stage the election.

Labor insiders say the youth vote will be a key factor in the upcoming poll, claiming there has been a spike in enrolments since Mr Rudd returned to the leadership.

The hiring of foreign strategists has come under attack by the opposition, with Liberal MP Jamie Briggs claiming the recruitment showed Labor was “terrific at spin but terrible at government”.

“Importing spin doctors to run negative political campaigns is another reminder for Australian voters that if you re-elect Kevin Rudd and Labor you will get three more years of division, dysfunction and chaos,” said Mr Briggs.

In the most recent Fairfax-Nielsen poll Mr Rudd led Mr Abbott as preferred prime minister by 55% to 41% and also held a strong lead in the net approval ratings with plus 8% to Mr Abbott on minus 15%.