Julie Bishop to quit parliament at the election

The exit of Bishop – the best-known Liberal woman and highly popular with voters - underlines the Liberals’ “woman problem”. 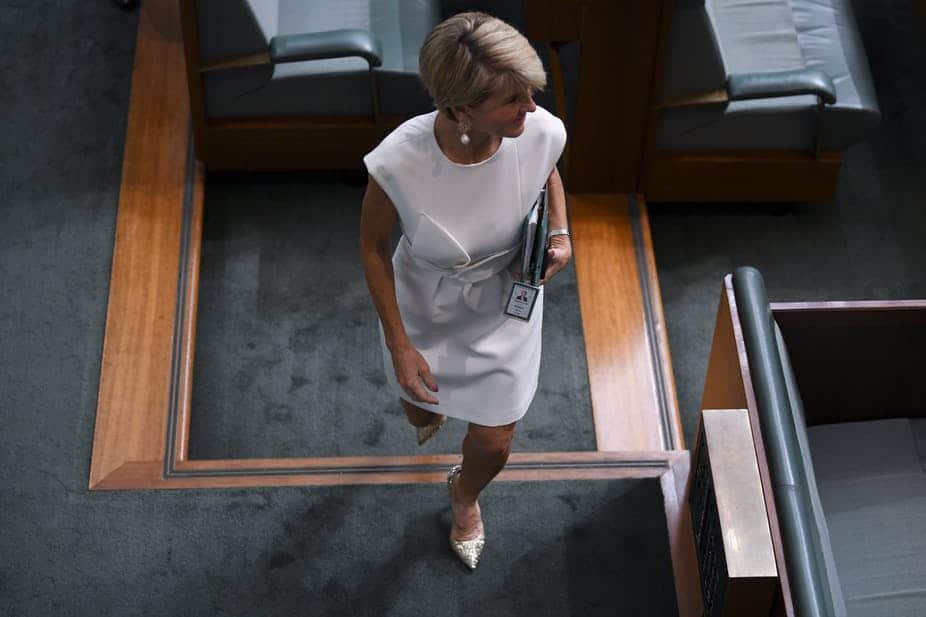 Julie Bishop has announced she will retire from federal parliament at the election.

Bishop’s statement to Parliament late Thursday confirmed the widespread expectation she would not seek another term, although she had repeatedly said she planned to recontest.

The exit of Bishop – the best-known Liberal woman and highly popular with voters – underlines the Liberals’ “woman problem”. It comes after the decision of cabinet minister Kelly O’Dwyer to leave at the election.

Bishop told parliament she believed the Coalition would win the election.

“And on that basis, I have reconsidered my position as the member for Curtin.”

She said she had been contacted by a number of “talented, indeed extraordinary, people, including women” who had indicated that if she did not recontest, they would seek preselection from her seat of Curtin. “It is time for a new member to take my place,” she said.

Curtin is one of the safest Liberal seats in the country. It has been said widely that Bishop wanted to delay an announcement about her future to give her maximum influence over who would be her successor.

She was known to want to keep Attorney-General Christian Porter from moving from his marginal seat, although he had said he did not want to do so.

Her speech reinforced the message that she believes the seat should go to a woman.

She was Australia’s first female foreign minister. In that role she travelled constantly and was a popular figure on the international stage. She was thrown into the international spotlight after the downing of MH17, in which 38 Australian citizens and permanent residents were killed. Australia was on the United Nations Security Council at the time.

After the coup that ousted Malcolm Turnbull, Bishop – who stood in the leadership ballot but received only a handful of votes – told Scott Morrison she did not wish to serve on the front bench.

Bishop, who is very close to Turnbull – although they had some ups and downs in earlier years – is on the moderate wing of the Liberal party.

It was speculated after she went to the backbench that if the Liberals were in opposition after the election, Bishop could become leader, although this did not seem a likely prospect.

Turnbull tweeted: “Thank you @JulieBishopMP for your service to our nation and our Party and, above all, your friendship over so many years. You have been our finest Foreign Minister – eloquent, elegant and always courageous advancing our national interest in these challenging times”.

Since she left the frontbench Bishop has become quite outspoken, including saying there needed to be bipartisanship on energy policy.

Bishop told parliament she was “proud of the fact that I am the first woman to contest the leadership ballot of the Liberal Party in its 75 year history.”

In the House Morrison described Bishop as an “incredibly classy individual”, and invoked the Biblical phrase “Well done, good and faithful servant.”

In a statement, the Prime Minister said she was “a giant of the Liberal Party and she has been a ground breaker for women in public life.

Bill Shorten said: “It is the end of an era.”

He paid tribute to Bishop’s handling of the aftermath of the MH17 downing – her calm, composure and kindness to the families.

“It was real. It was authentic. … I remember the service in Melbourne at St Patrick’s and she really was a leader. But I also saw her steely determination in international forums to pursue justice and she was very strong”.

O’Dwyer tweeted: “@JulieBishopMP You have been an outstanding leader in our Party, an incredible trailblazer and a beautiful friend. You’ve made us proud for all you have done and all you have achieved. We are forever in your debt. With love.”

Julie Bishop has announced she will be retiring from parliament.
(Lukas Coch/AAP/The Conversation)