The son of controversial former Queensland premier Sir Joh Bjelke-Petersen, John Bjelke-Petersen, has quit the Liberal-National Party and today announced that he will run as a candidate for the Palmer United Party. 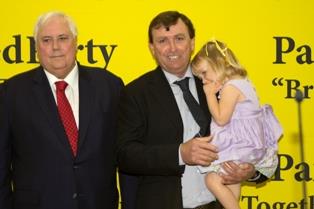 THE SON of controversial former Queensland premier Sir Joh Bjelke-Petersen has quit the Liberal-National Party and today announced that he will run as a candidate for the Palmer United Party.

John Bjelke-Petersen will stand for election in Maranoa, a division in Queensland’s south-west that is currently the second-safest Coalition seat in the country. He said that he had made the change from the LNP to the Palmer United Party because he was “disgusted” with the way that the LNP was treating regional Australia.

Mr Bjelke-Petersen said: “Regional Australia creates the majority of the wealth that drives this country yet we struggle to maintain services and infrastructure due to lack of will and funding by state and federal governments. I support Clive Palmer’s policies to reunite Australia and return the wealth back into the areas that create it. I want to be part of a team that will deliver back to rural and regional Queensland.”

Mr Bjelke-Petersen announced his resignation from the LNP on Wednesday through media advisors for the Palmer United Party, sparking intense speculation that he would be announced as a candidate. Founder of the Palmer United Party, mining magnate Clive Palmer, was an outspoken supporter of Mr Bjelke-Petersen’s father in his infamous bid to be elected as Prime Minister, which has many parallels with Mr Palmer’s own attempt to enter federal politics.

Mr Palmer said: “John Bjelke-Petersen is an outstanding candidate for the seat of Maranoa. He possesses a strong personal knowledge of the rural sector and has vast political experience, making him the ideal voice for the people of south-west Queensland.”

The Kingaroy local, who runs a tourism business on the family’s country estate, ran for his father’s original electorate of Nanango as an LNP candidate at both the 2006 and 2009 state elections. He was defeated on both occasions, however polling undertaken by a “business consortium” last year revealed that Mr Bjelke-Petersen may perform considerably better in a campaign for Maranoa.

Mr Palmer said that he intends to field candidates in all 150 House of Representatives seats at September’s federal election. The Palmer United Party’s early candidate announcements have come primarily from Queensland and include a mix of well-known political figures and business identities from across the state.