Joe Hockey has taken Fairfax Media to court over a front-page story suggesting the federal treasurer was for sale. 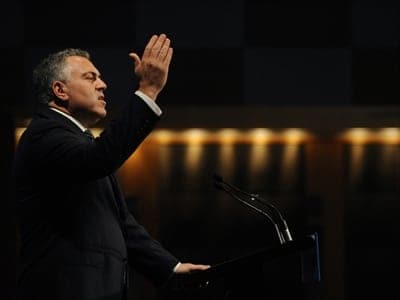 Joe Hockey is suing Fairfax Media over a front-page story in its major metropolitan newspapers headlined “Treasurer For Sale”.

Lawyers acting for the federal treasurer have started defamation proceedings in the Federal Court.

“The treasurer’s determination to seek to prosecute this matter should not be underestimated,” his spokeswoman told AAP on Tuesday.

The story, published in The Sydney Morning Herald and The Age a week before Mr Hockey handed down his first budget, claimed the treasurer was offering privileged access to a select group that included business people and industry lobbyists in return for tens of thousands of dollars in donations to the Liberal Party.

The donations were funnelled through a secretive fund-raising body whose activities were not fully disclosed to election funding authorities.

In return for annual fees of up to $22,000, members were rewarded with “VIP” meetings with the treasurer, often in private boardrooms.

Mr Hockey, in rejecting the claims at the time, described the accusations as both offensive and repugnant. – AAP