Treasurer Joe Hockey is not worried about the latest opinion poll, saying the government was elected to fix the economy. 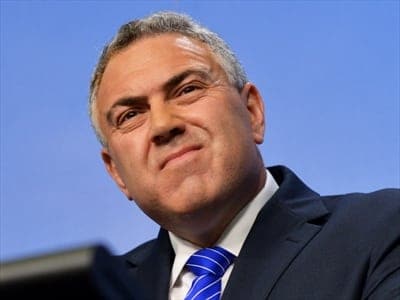 Treasurer Joe Hockey says suggestions that opinion polls are devastating for the government are “absurd”.

The latest Newspoll shows the Abbott government trailing Labor 47 per cent to 53 per cent on a two-party preferred basis.

Prime Minister Tony Abbott also has a dissatisfaction rate of 61 per cent, his worst result since becoming prime minister.

“He and I are making the hard decisions that need to be made in the national interest,” he told Fairfax Radio on Tuesday.

“The suggestion that 47/53 is a devastating blow to the government is kind of absurd.”

He said the coalition was elected to deliver a strong, purposeful budget to fix the economy.

“That’s exactly what we are doing,” he said.

He said the government is prepared to discuss budget initiatives with the Senate, such as the $7 co-payment when visiting the doctor, but he believes the government has laid down the best possible policy to make the Medicare system sustainable.

“Don’t think we are just going to roll over on our budget initiatives because we are firmly of the belief that they are exactly right for the economy and the country,” he said.

“No one is providing an alternative.”

Meanwhile, there was some good news for the government as consumer confidence continued to show a gradual recovery from its budget related slump.

Health Minister Peter Dutton said he is optimistic about negotiations on the Medicare co-payment but refused to comment on what was being discussed with crossbenchers.

“I’m confident we can get the co-payment through parliament, that we can get the $20 billion Medical Research Fund established,” he told reporters in Canberra on Tuesday.